Work on the Matron

Got a bit done on the matron today. I suspect I'll be focusing on her until she's done. The little peg thing is not sufficiently held in place by poster tack, which makes her lean all over the place and come loose occasionally. Also, since she's on the edge of the film canister I'm tacking her to, the thing isn't balanced and will fall over when sitting on the table if I forgot to lean it against something. So, she's kind of a pain to work with and I want to get her off the table. 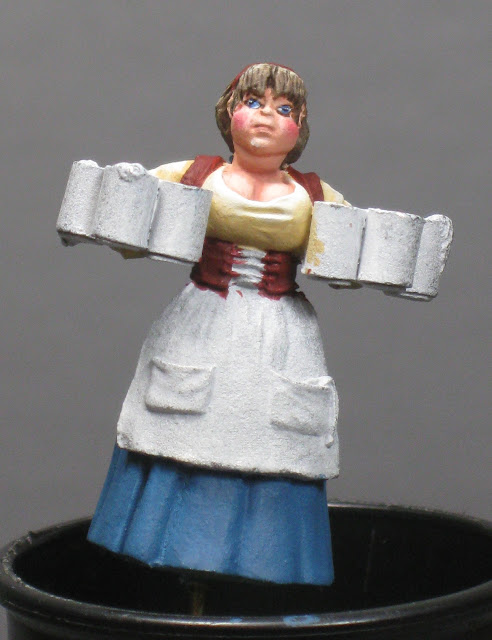 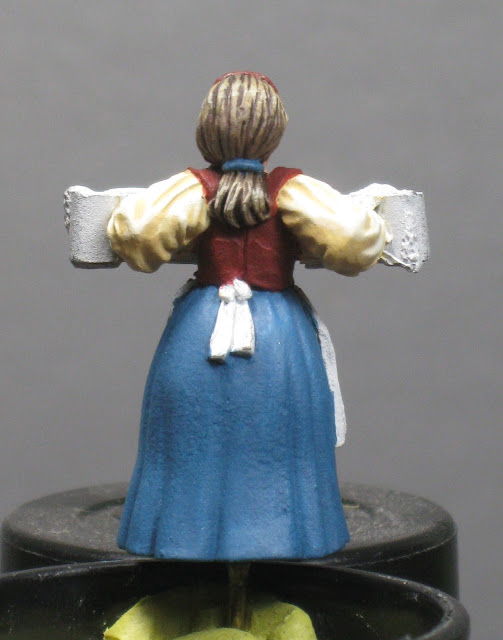 I did shading and highlighting on her shirt, and base coated some other clothing. Soon I'll need to make some decisions on what color to make the apron and the mugs. The apron, I'll probably go with the same color as the shirt. The mugs...not sure. Maybe I'll try for pewter. Maybe wood. They could be pottery, too, in which case most any color would work.

Also, today it was warm-ish enough to try out the new can of spray primer I bought. It's Valspar White Primer. I don't like it. The spray comes out quite heavy and with an inconsistent drop size. Also, it has a broad cone of spray. I think it I were wanting to primer a mail box or bird feeder or something, it'd be great.  Since I want to do somewhat finer work, it's less useful. Now, to be fair, the can says it wants to be used when the temp is 65 to 90 degrees (F), and today we topped out at a  balmy 54. So, if I try it when the temperature is closer to where it wants to be, I might have better luck. I'll also take a look at the guys I primed tomorrow and see if I change my mind.

Posted by MiniPainterJen at 4:44 PM