And, to round out the year, here is the finished Freja. 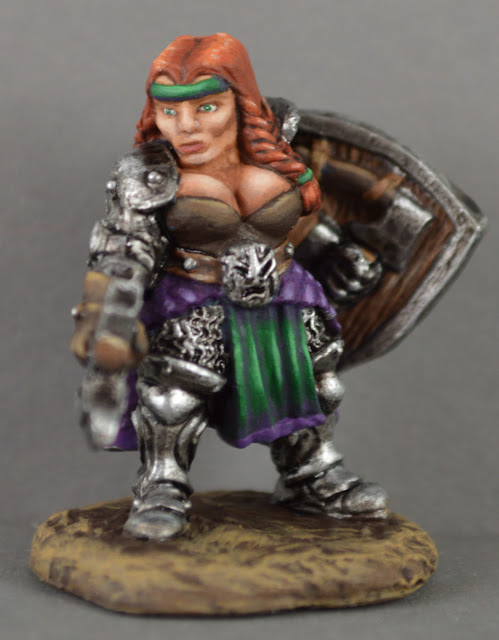 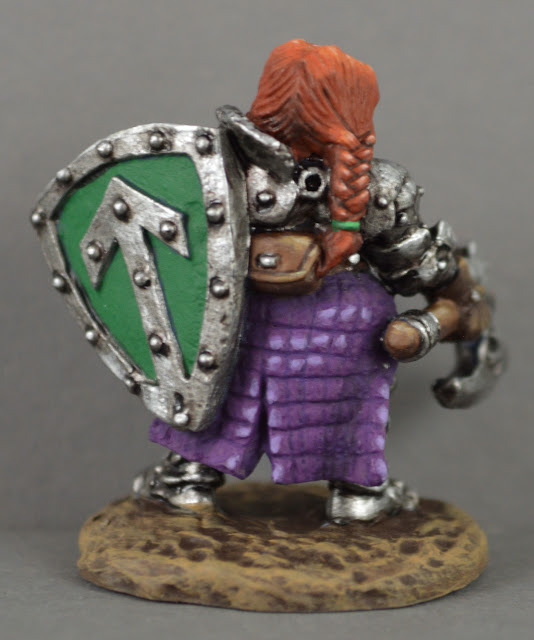 And that's enough green and purple for a while, I think.

20 figures (not counting commissions) isn't bad for the year. Not the best count I've had by far, but not the worst, and I'm proud of a lot of the work I did this year.

I hope to start up next year by finishing up a couple of the projects that I started last year and then stopped working on/abandoned for other things. Also, very soon you should start seeing planning for my World Model Expo entry.
Posted by MiniPainterJen at 12:43 PM No comments:

So, here's what I was working on for a big chunk of the month I wasn't posting. It was a Christmas present, so I didn't want to post anything until it had been given. That's done now, so...here's Cthulhu. 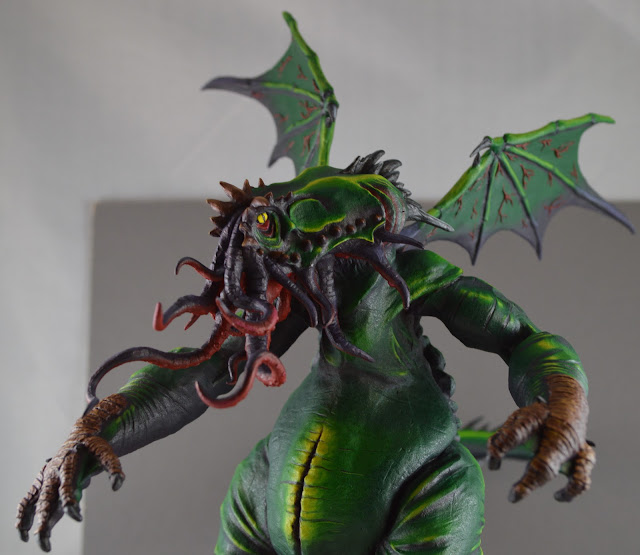 This is Reaper Bones Cthulhu. It's a large model - 9", according to the package. The first thing to figure out was how to hold him while painting him. My husband made this handle that could be screwed into his nethers. 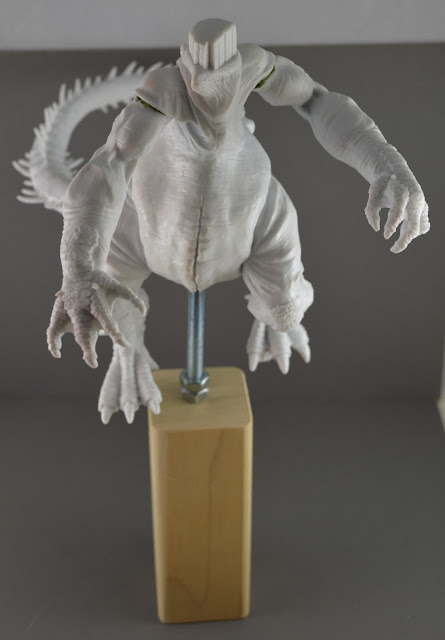 After that, I airbrushed a shadow and base coat on. Didn't get any pictures after just the airbrushing, unfortunately.

With the base coats in place, I went on to shading a highlighting. This is early in the highlighting process. 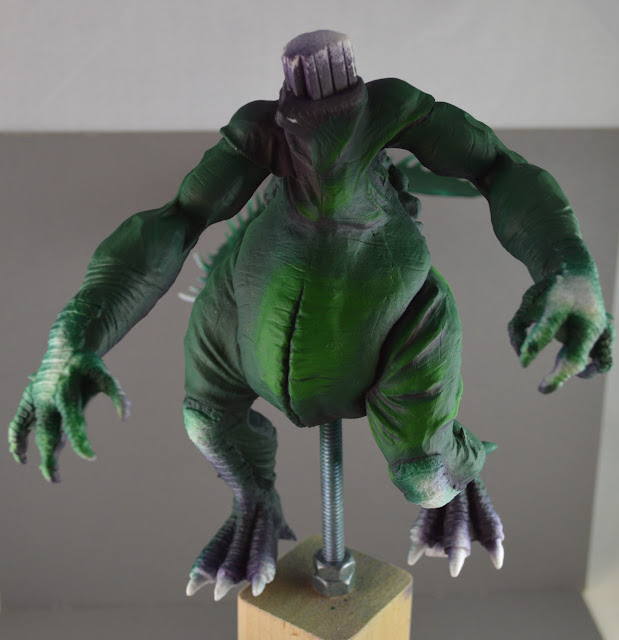 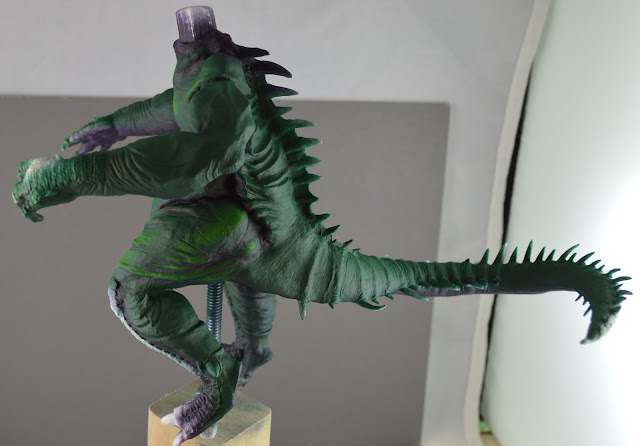 Shading and highlighting took a while. He's a big guy. Here he is, farther along in the highlighting and shading. 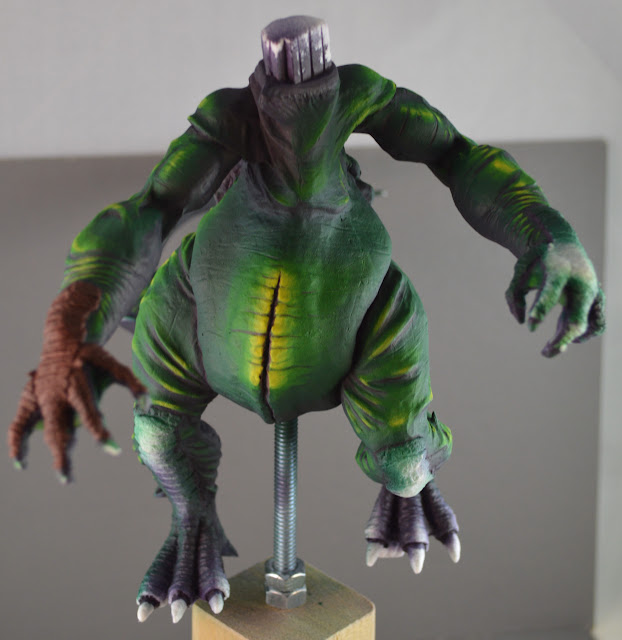 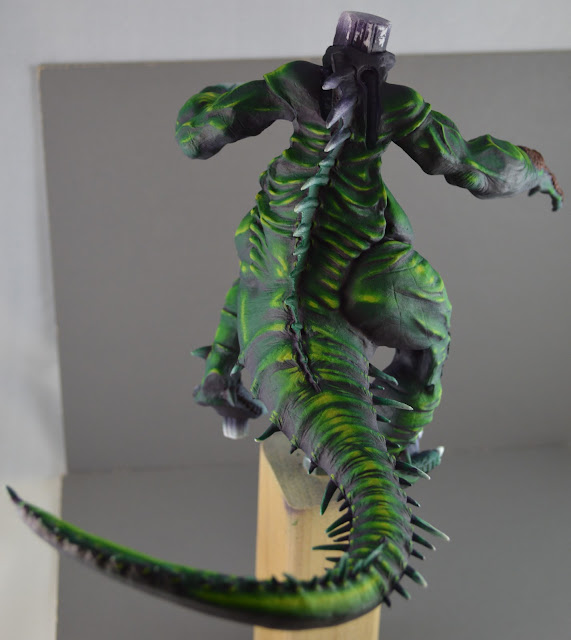 Once I had the shading and highlighting of his skin the way I wanted it, I went on to his scales. 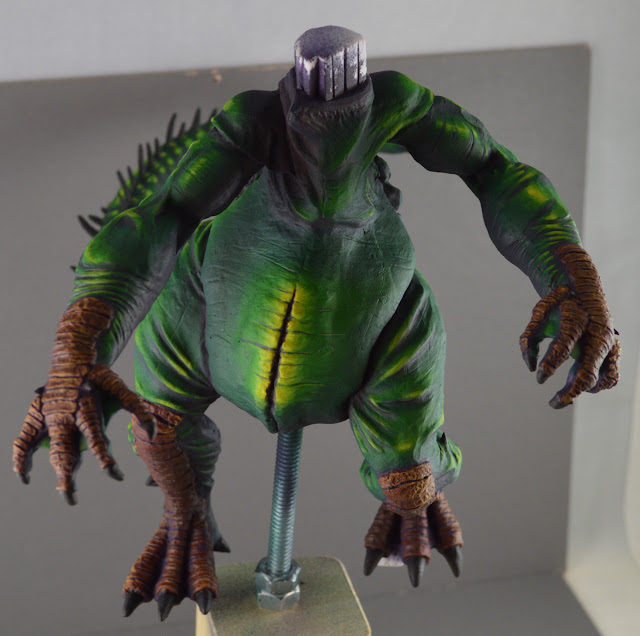 ...and also his spines and claws. 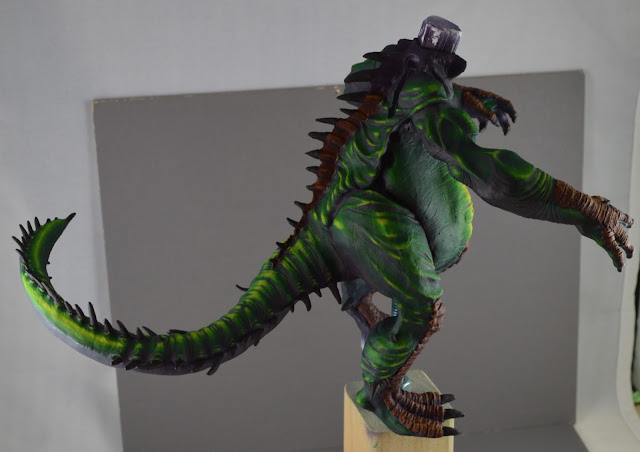 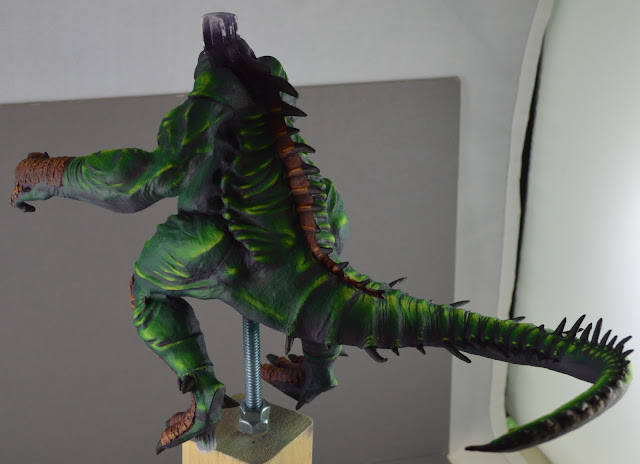 Once his body was complete, I went on to his head. I had a separate holder for the head so I could work on it without it being on the body. 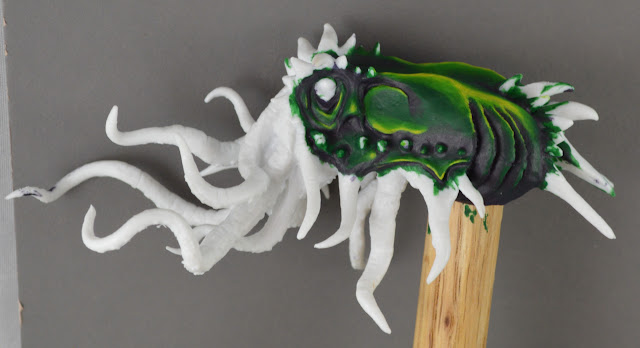 After the head was the wings, and then basing him. I used the base he came with but put it on a wood (cherry, if you're curious) platform that my husband cut for me. I had to adjust the base a bit as well, as he didn't quite fit on it the way he was meant to. I filled in the hole in the stone slab his foot was supposed to go into because it wasn't reaching, then drilled another hole farther toward the inside of the base. 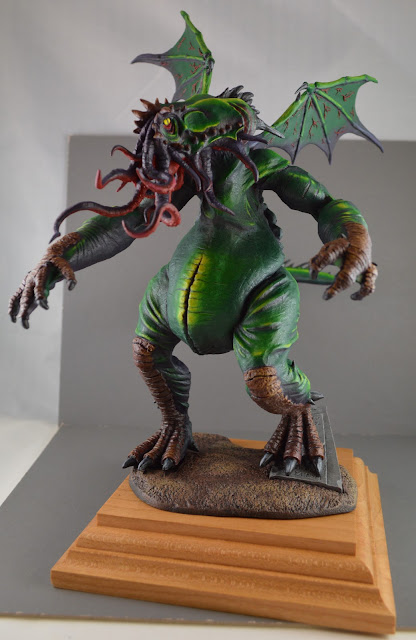 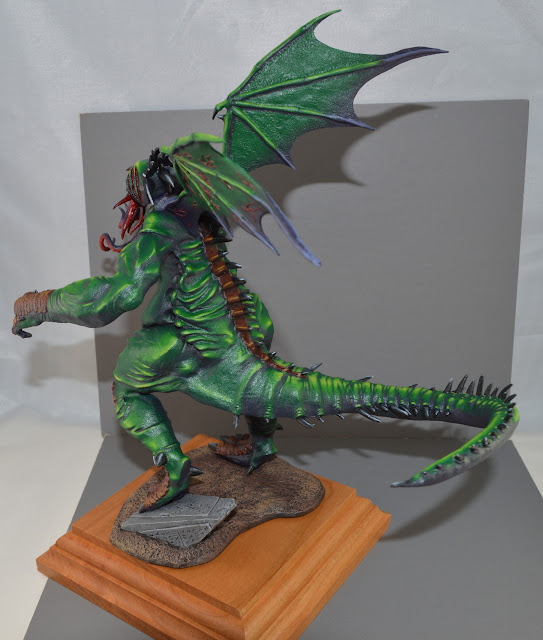 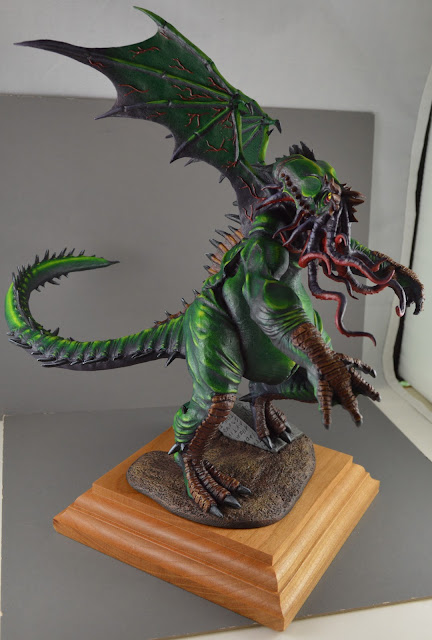 And that's all of him.
Posted by MiniPainterJen at 4:54 PM No comments:

Worked on Freja's armor and leather bits today. I should get her finished up tomorrow. All I need to do is put some highlights on the armor, paint a couple of straps on her shield, and the base. 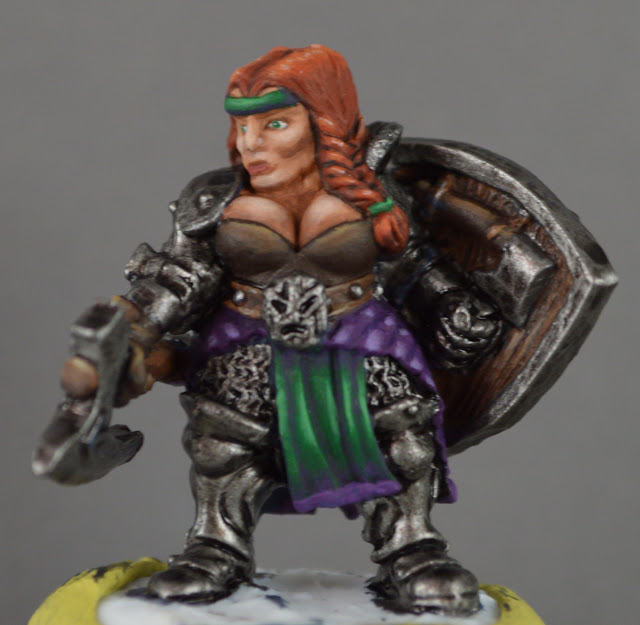 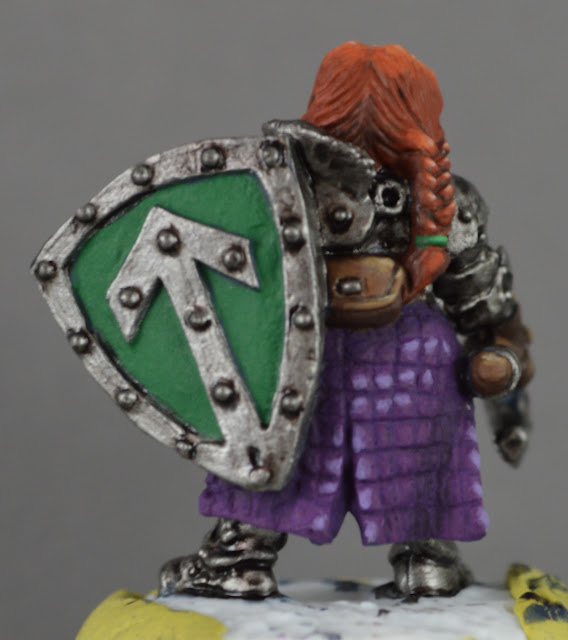 Posted by MiniPainterJen at 4:40 PM No comments:

More work on Freja. I think the first time I painted this (I'll show that one when this one is done, for comparison) I made that jacket thing more metal armor. This time I've decided it's a sort of quilted jacket thing. 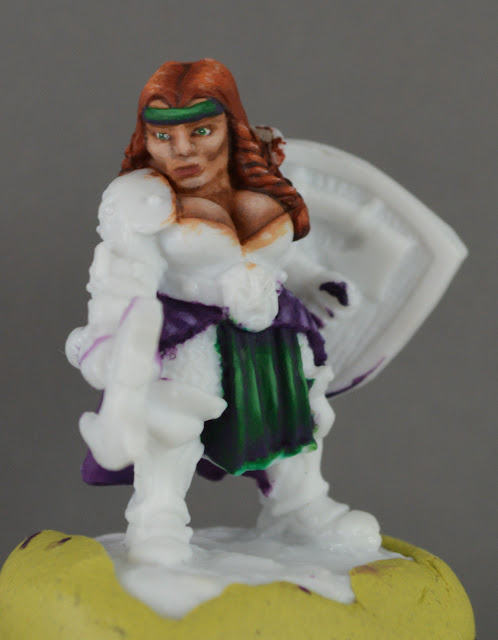 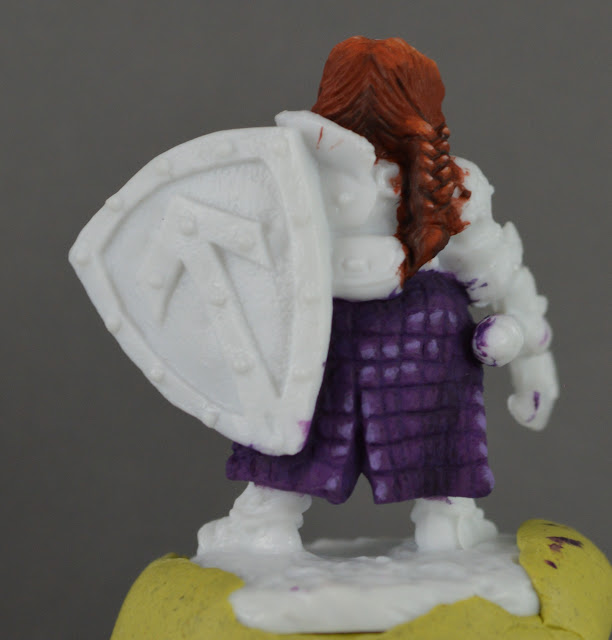 Posted by MiniPainterJen at 5:48 PM No comments:

Yes, it's been a while. Holidays and working on commission stuff that I couldn't post. Should be back to normal from here on out.

I started working on Freja Fangbreaker today. She is destined to be a table top figure...I mean her to be a quick and easy 'palette cleanser', if you like, to wrap up the year before I get back to Skarre. 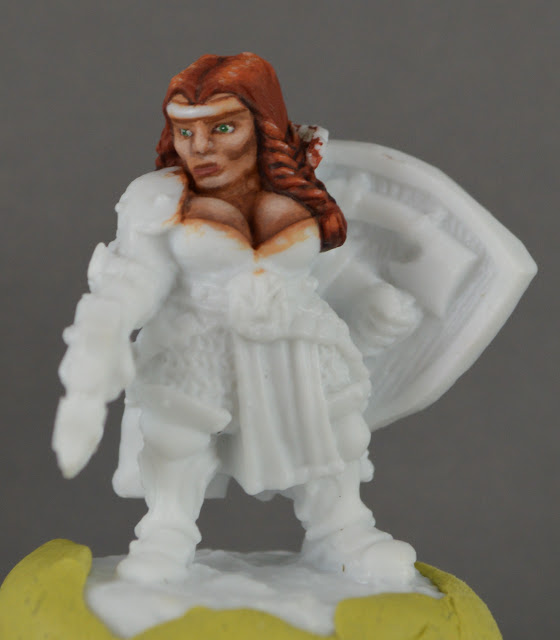 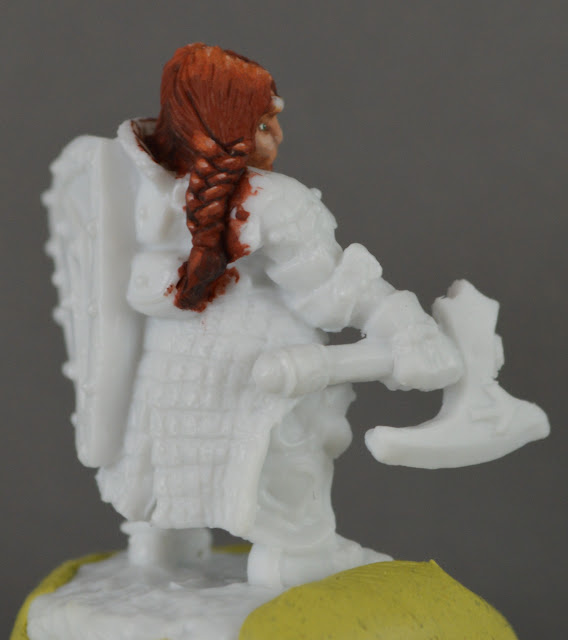 Posted by MiniPainterJen at 2:01 PM No comments: