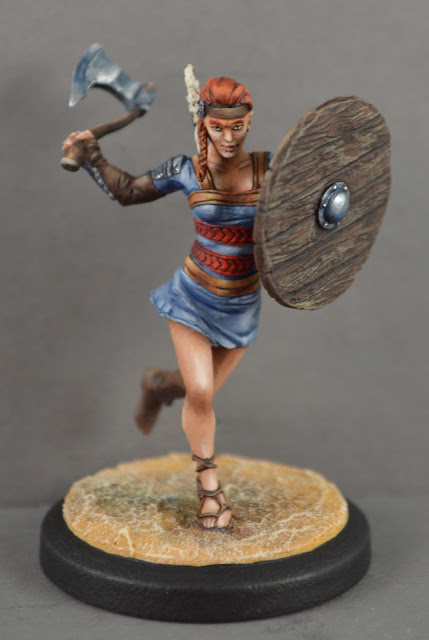 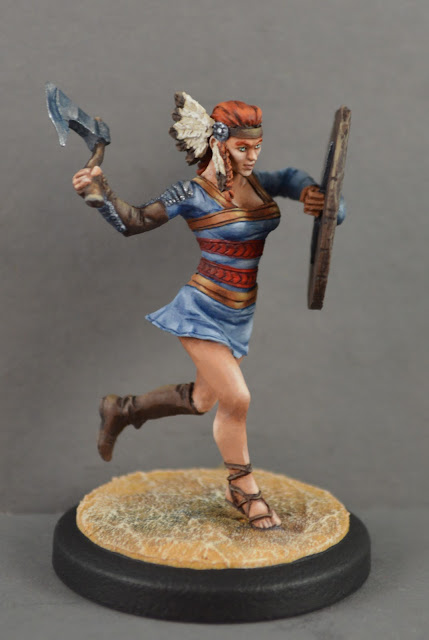 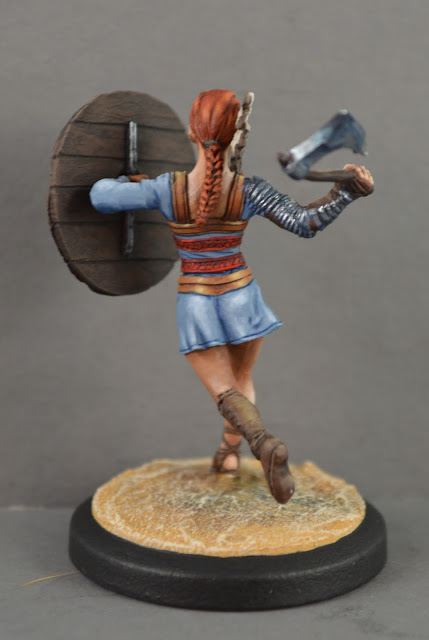 Posted by MiniPainterJen at 7:50 PM No comments:

I finished off Frigge's dress, and then glued on the remaining bits. 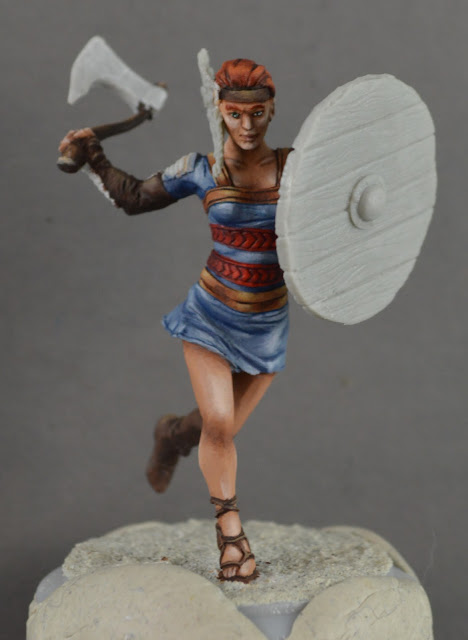 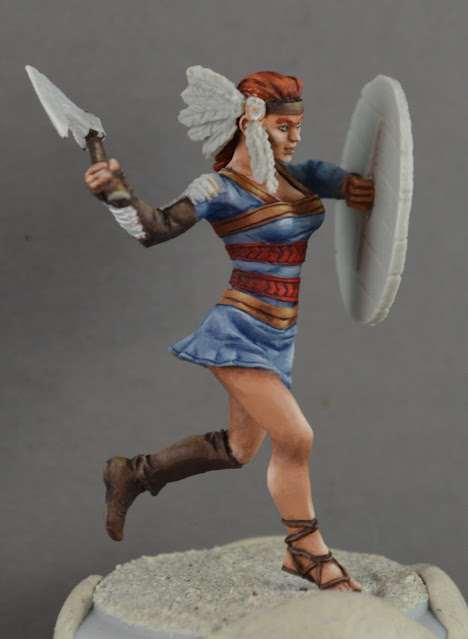 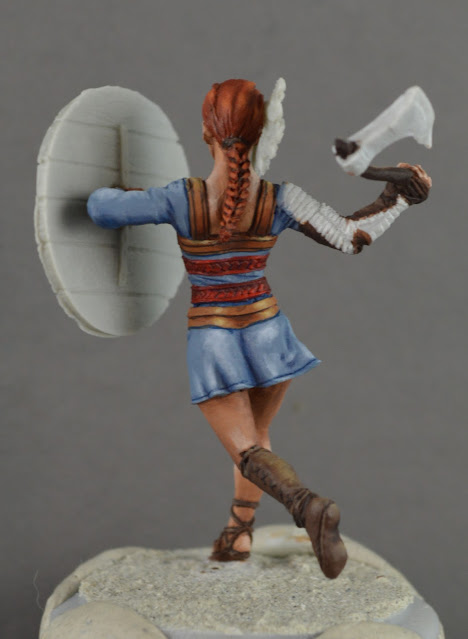 She also comes with feathers that are supposed to go along the bottom edge of the shield, but I think they look kinda weird so I'm not going to use them. I also have doubts about how sturdy the feathers on her head will be. I give it a 50/50 chance that at least one of them comes off while I'm painting them.

Either way, I'm hopeful that I'll be able to finish her tomorrow.

Since once I glued those things on I couldn't work on her anymore today, I got back to the base: 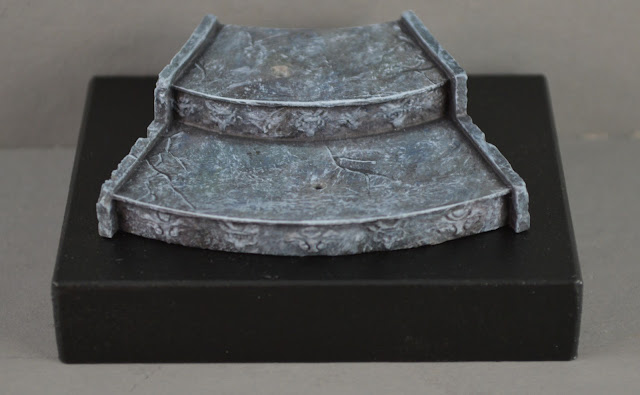 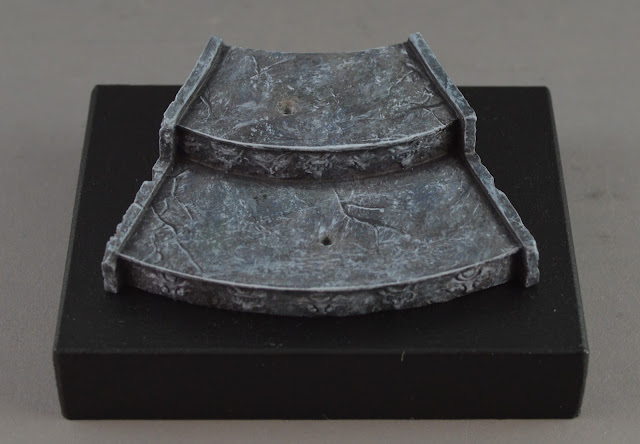 The nice thing about painting things like stone is that if you do something and you're not happy with it, you can just keep futzing. I first did a wash of off-black, blue, and purple, but I wasn't loving where it was going. So I came back with desaturated green and blue, and a darker brown, and then a couple lighter greys, and stippled those colors all over the place. I was a lot happier with that. Then I hit it with a wash again to kind of make all the stippling look more like part of the rock rather than just sitting on the surface. Then, I painted a dark color in the sculpted cracks and corners. I was so happy with the cracks that I painted on a few extra. Then I went back to the light gray to pick out the edges, line the edges of the cracks, and highlight the sculpted bits on the front of each step. They don't show up well in the pictures, but look better live. I might put some dark around them to make them show up better.

I think I'm pretty content with it, but I'm going to wait and see what I think tomorrow before actually gluing it to the plinth.

Posted by MiniPainterJen at 5:05 PM No comments:

Shading and highlights on Frigge's dress. Also did the leather straps. Once I do the beaded sections, I'll look at putting her shield and other remaining bits that aren't attached in place. I'm happier with the dress now than I was when I started working on it earlier tonight. It definitely went through an ugly phase, and is better now than it was. Still, this is never going to be one of my best. 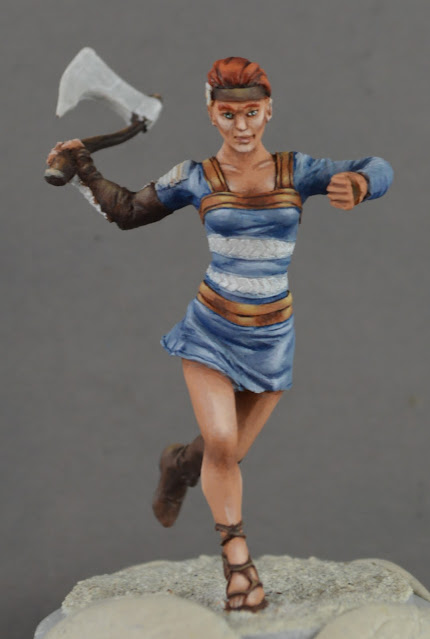 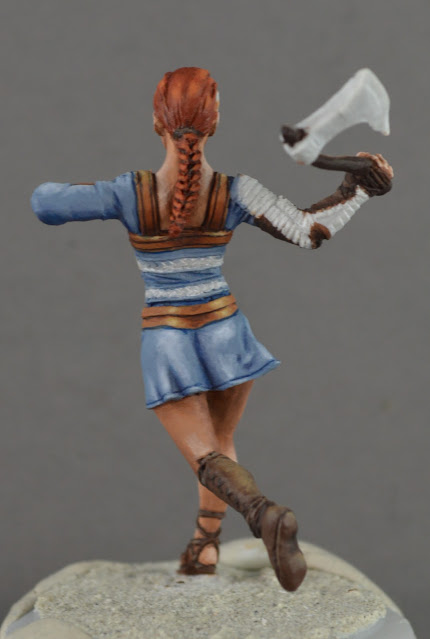 I've also started putting together my next project. It's a 75mm figure of some kind of sorceress person. I've washed it, cleaned up a bunch, and started gluing her together. I've got to do some puttying and more gluing. I've also decided to use her built in base. I'm starting on that, because I think what I want to do is get the built-in base attached to a display platform, and then start attaching her to the base, piece by piece. I think this'll give me something to hold on working on her, but also let me build up the pieces as I go as I have to to be able to paint everything as easily as possible. That'll make more sense once I start posting pictures of the figure.

Anyway, so here's her base with just the base coat on. Next I'll be finishing the stone steps, and once they are all painted, I'll attach it to the black plinth. Right now it's just sitting on there. 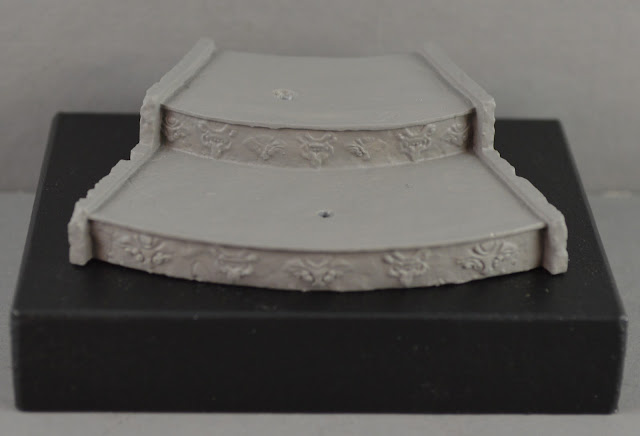 Normally I paint a figure, then do the base afterward. Part of that is just habit, but one of the things it lets me do it add some of the colors on the figure into the base. Since I'm starting with the base here, I'll have to either decide on my palette now, keep the steps very neutral, or plan on adding in colors from the figure later, very carefully. Probably I'll end up adding in colors later, as I haven't the slightest idea how I'm going to paint the figure.

Posted by MiniPainterJen at 6:09 PM No comments:

Got highlights on Frigge's boots and sleeve. Then I debated for a long time about what to do with her dress. That's part of the reason it's taken me so long to get back to her, I had no idea what colors I wanted. I have been kind of giving the different factions in here similar coloring, so I kinda wanted to stick to that. It wasn't any help, though, as the other figure from this faction was just in leather, and I didn't want to give her an all leather outfit. I went through a couple options and settled on this light blue, which I think I like pretty well with the rest of her colors. 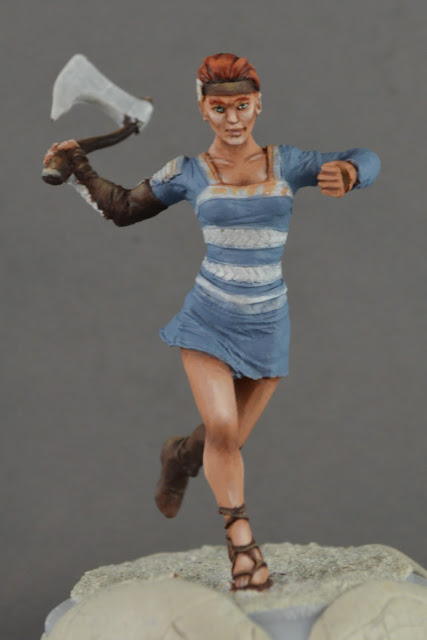 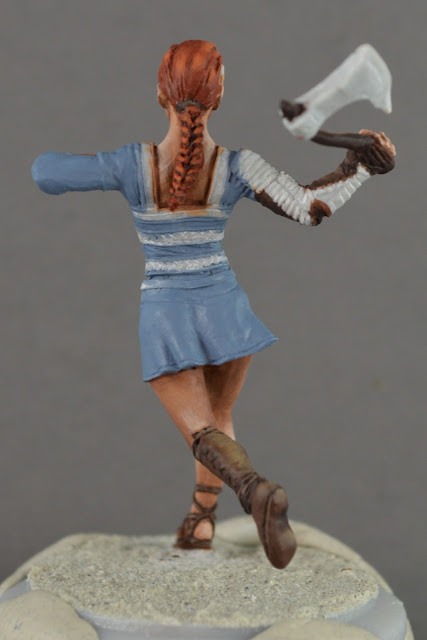 Her outfit is weird. The plates over the arm seem like they should be on a leather sleeve. So, I thought about switching the top of her dress to leather, but decided I still didn't want to do that. Some of those straps will be leather. The others are beaded, and they'll be darker blue and red. That'll match with the other character.

Posted by MiniPainterJen at 2:33 PM No comments:

I had a little bit of time left after finishing some commission work today, so I got back to Frigge. All I did was start shadows on the leather bits, including her sandal that I had overlooked before. 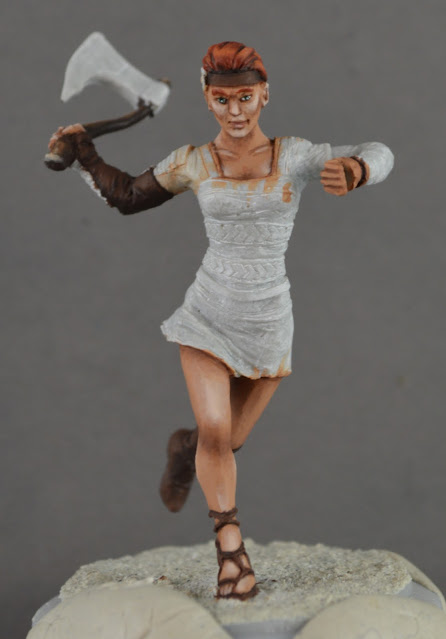 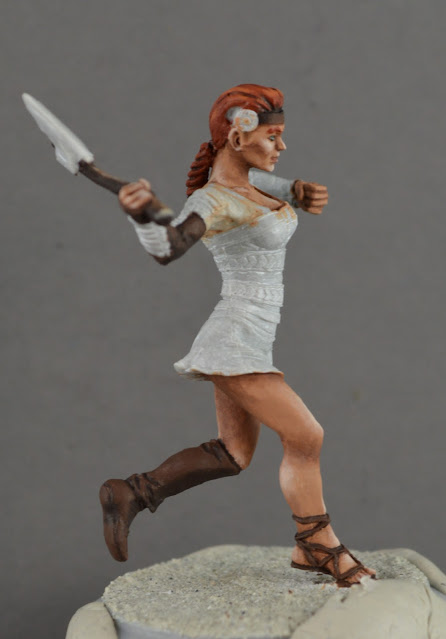 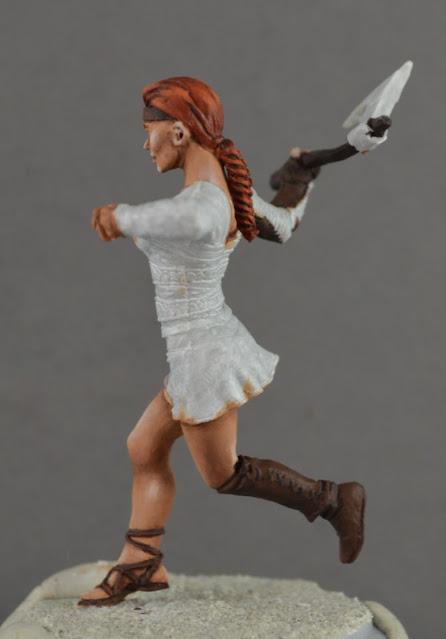 Posted by MiniPainterJen at 3:54 PM No comments:

Pushed through and finished the gnome today. This is clearly not my best work ever. The sword and the base are both pretty meh. I was happy with the flame until I put some red on it, but then the red was too much, so I glazed it back with orange until it wasn't quite as stark.

Anyway, the dude served his purpose. He was fine for the face tutorial I did a while back, and I finished him up for the heck of it. He'll end up on a gaming table somewhere. 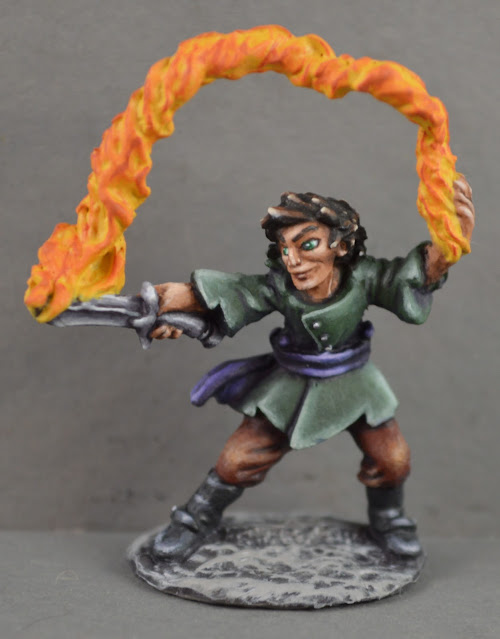 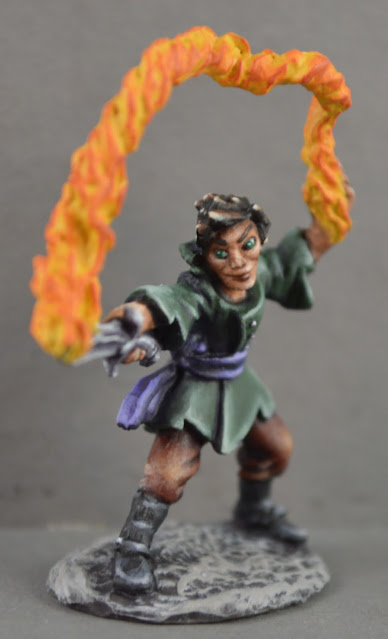 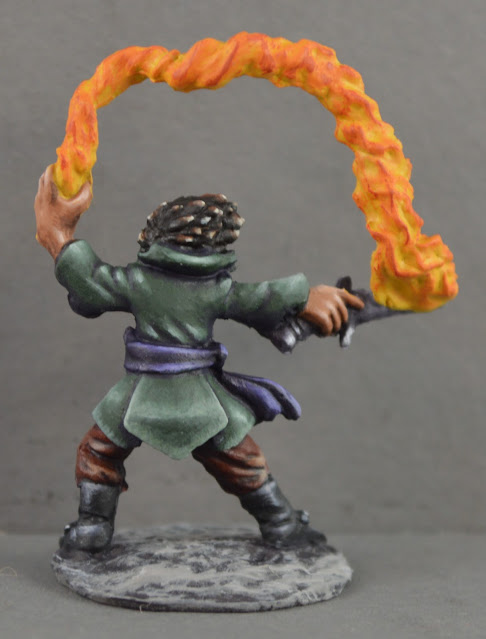 Posted by MiniPainterJen at 6:30 PM No comments:

I had a little time after I finished up my commission work today, so I went back to this guy. I put highlights on his pants and finished up his boots. Also got in a base coat on his sword. 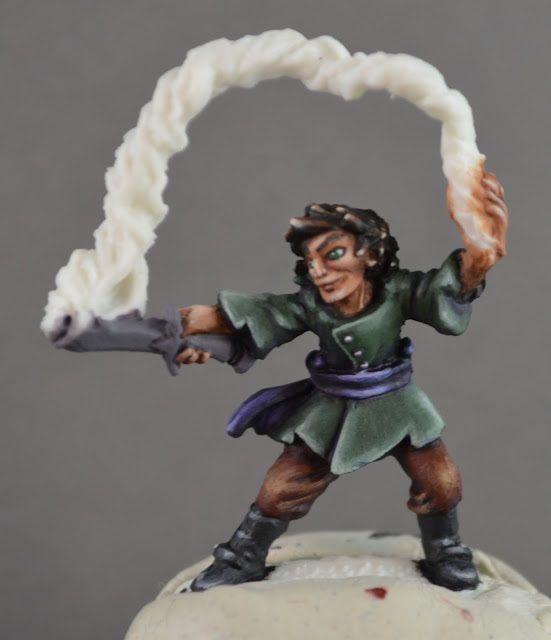 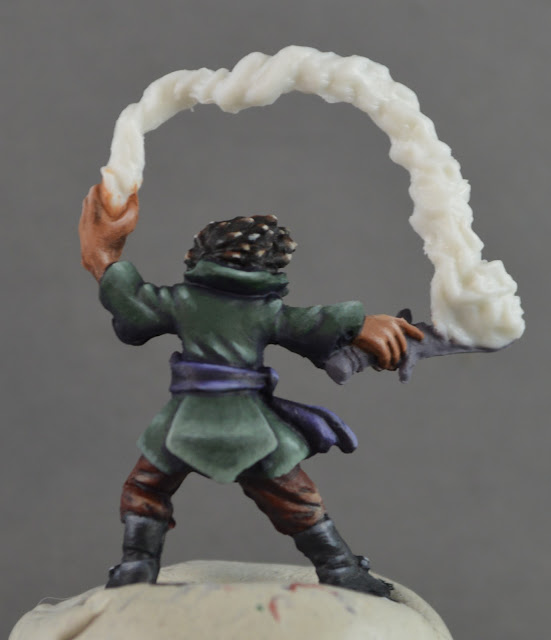 Posted by MiniPainterJen at 3:58 PM No comments:

Got some work in on Frigge today. Finished her skin, face, and hair, and started the base coat on her leathers. 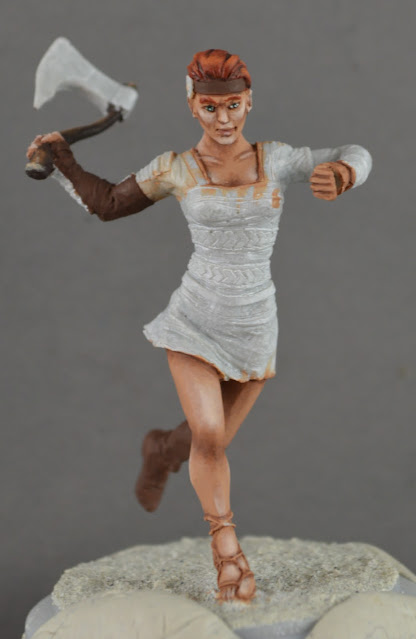 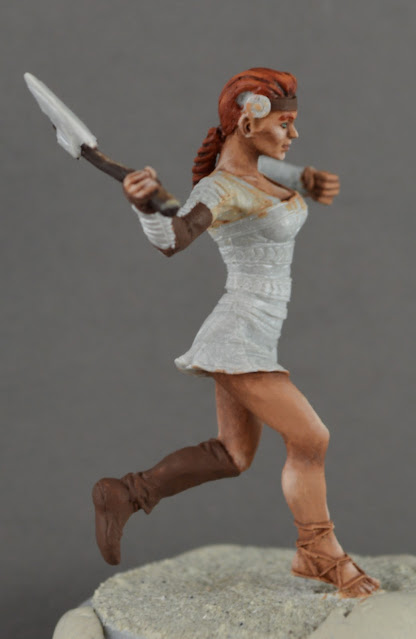 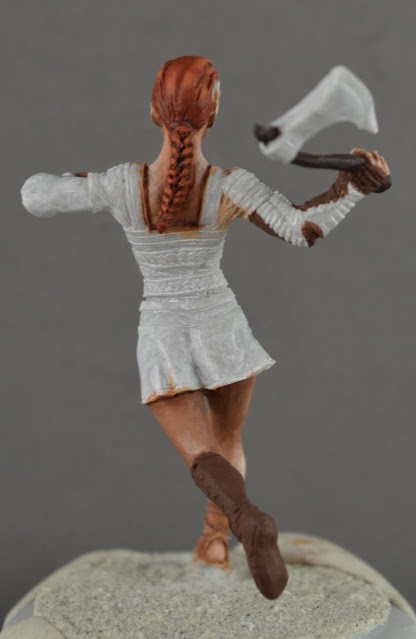 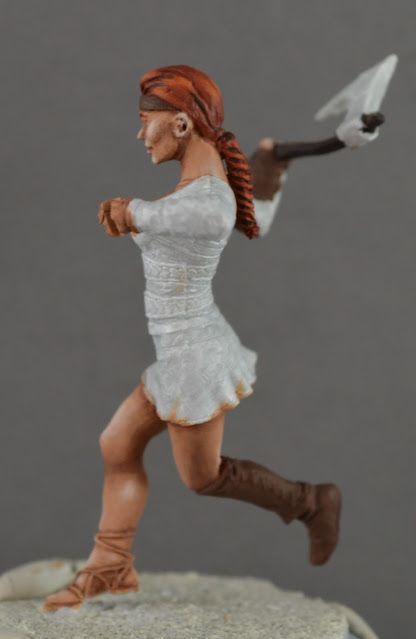 Posted by MiniPainterJen at 4:50 PM No comments:

I'm working on a commission piece right now that is taking most of my time, but I've also started this next Arena Rex gladiator: Frigge. She should be quick and easy to finish, and will let me get her spare pieces attached before I forget what they go to. This is the base coat on her skin and a first round of shadow. 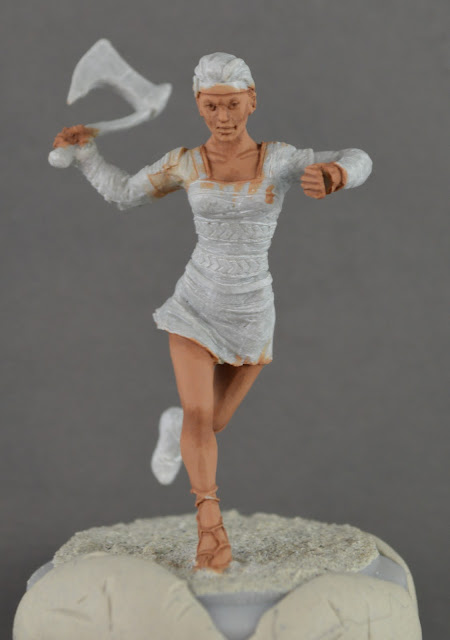 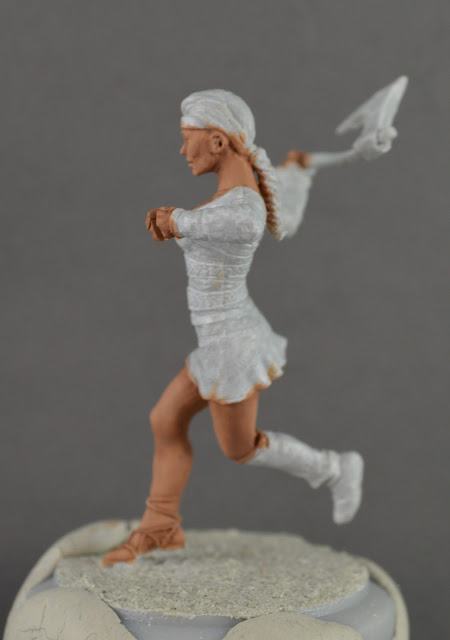 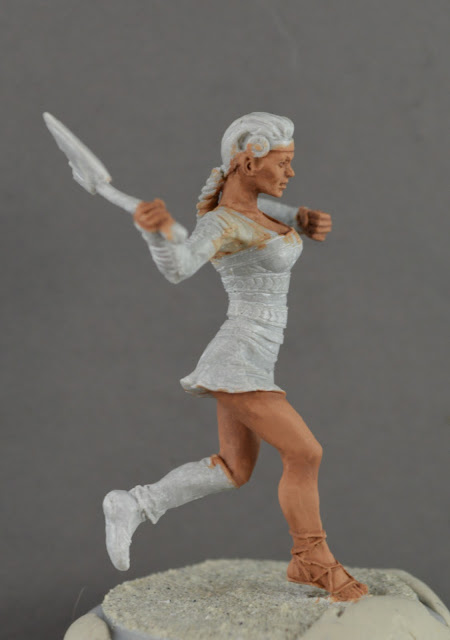 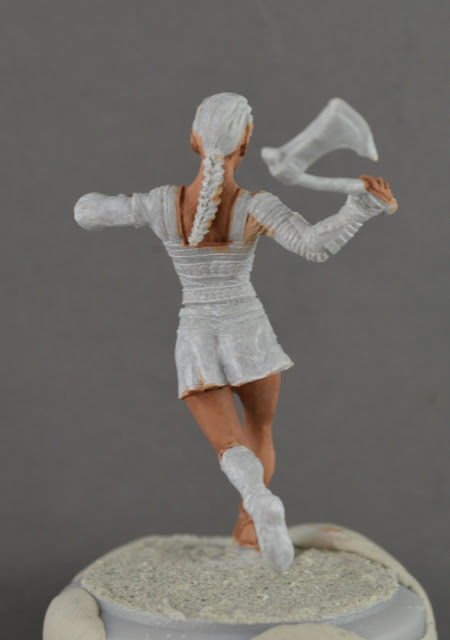 Posted by MiniPainterJen at 5:50 PM No comments: