Finished the highlights on the teal, and shaded and highlighted the magenta. 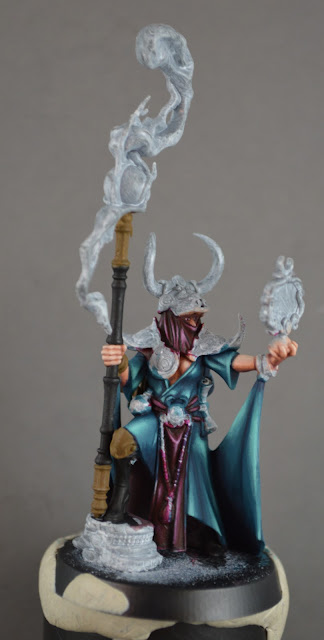 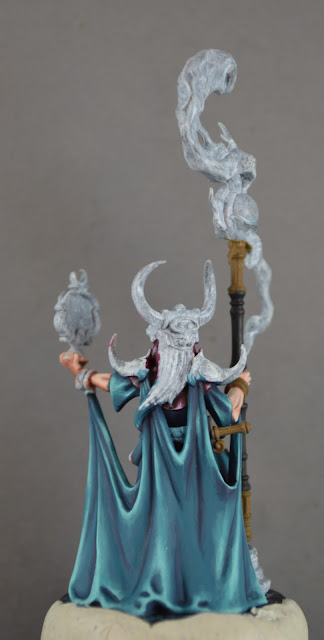 He doesn't look it yet, but I think he's going to come together nice.

Posted by MiniPainterJen at 4:54 PM No comments:

There's more highlighting to do on the teal, but I spent most of tonight prepping some new projects and I didn't have a ton of time after that for this guy. So, instead I base coated the veil and loincloth thingy. I was expecting the color to be more red than magenta, but the magenta is fine.

I should really spend some time focusing on this guy and get him finished up. That'll probably happen soon - the things I'm prepping all need bases or plinths to be cut, and that may not happen for a few days.

Posted by MiniPainterJen at 6:08 PM No comments:

I've redone the shading on the sorcerer and starter the highlights. Much better.

Posted by MiniPainterJen at 5:48 PM No comments:

Sorcerer: A Thing That Didn't Work

I got back to the sorcerer today, starting to shade his cloak. It did not go well. Sticking with the idea of using all the Scale 75 paints, I mixed the reddish-purple color I had used to block in shadows before putting the figure together with the base teal, and got a slightly purple-ish gray. I was dubious, but went with it. It got chalky and pale as it dried. When I went back with the straight-red purple, it was quite clear it just wasn't going to work. So, I'm going to go back over everything with the base coat and change my shadow color. It won't be one of my new paints, but so be it. I'm probably going to switch to a dark blue.

Posted by MiniPainterJen at 5:40 PM No comments:

Finished Vin today. I painted and glued on all the unattached bits, puttied some of the gaps after placing her, and painted the putty. 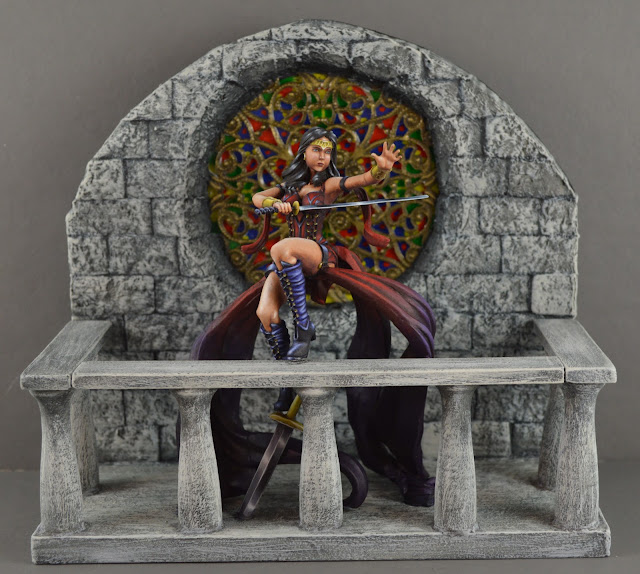 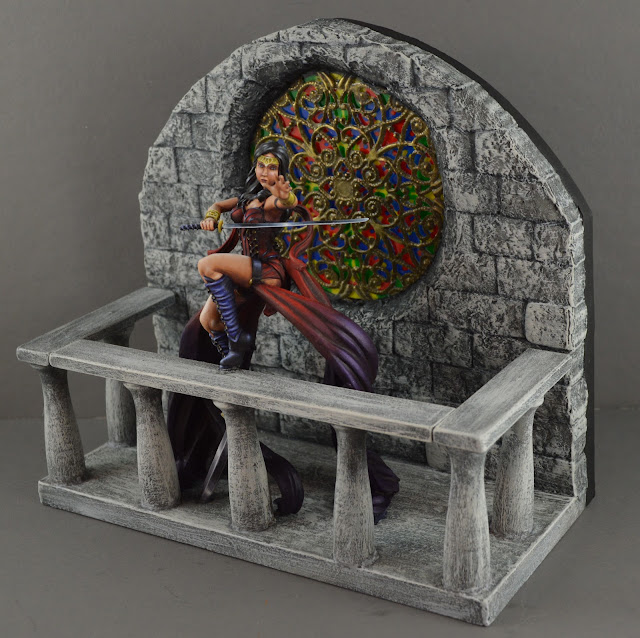 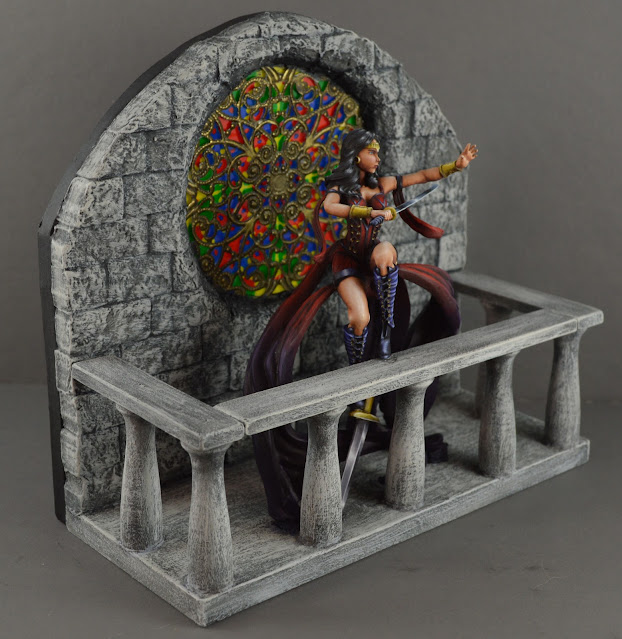 Some of the skirt bottom areas are more visible than I was expecting, and I probably should have done more with them...then again, it's not where the focus should be. I wish she stood out better against the backdrop...I'm not sure how to fix that. Making her hair dark wasn't enough. I also wish the piece had more of a 'night time' feel to it...I do know how to do that in theory, I just didn't do it. But it's done, and honestly I'm pretty content with how it came out.

I finished Vin's skirt today and put her on her base. She's not done - I still have to paint and attach a couple additional small pieces, like her other hand. There's also a couple build issues I'm going to fix. For instance, the extra bit that I put back on her skirt hits against one of the columns, so she doesn't sit quite down all the way on the base. I am probably going to jam some putty in underneath to fill the gap and hopefully make the join a little stronger. 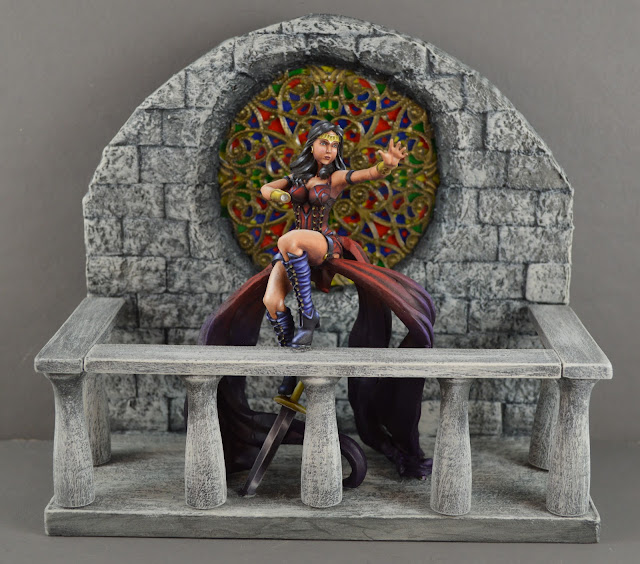 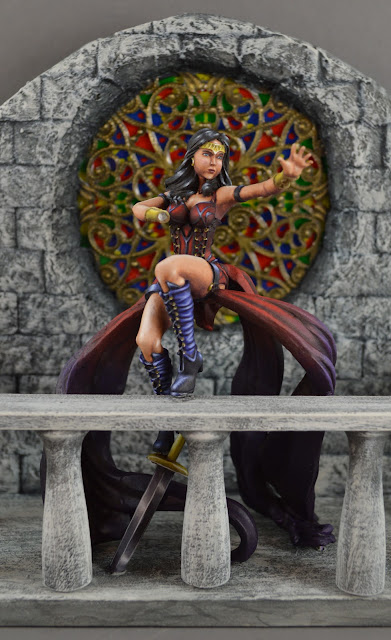 I'm probably not going to fix the gaps between the little pillars and the base. I don't think I could without making it look funky.

As a whole, this piece is working out more or less the way I wanted. It has some issues:

Posted by MiniPainterJen at 3:59 PM No comments:

Shading and highlights on that one side of the skirts. This is probably all I'm going to do with that, but I'm not sure. 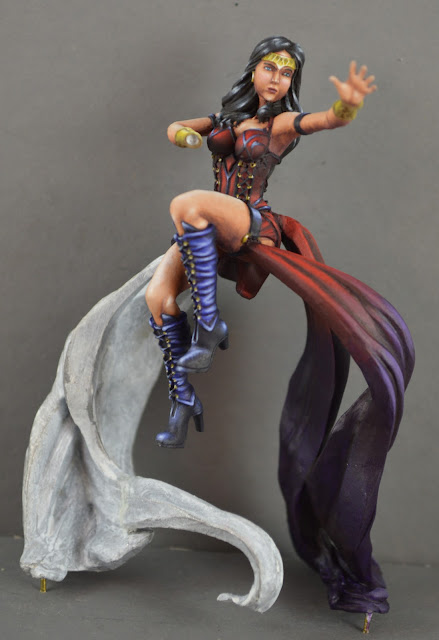 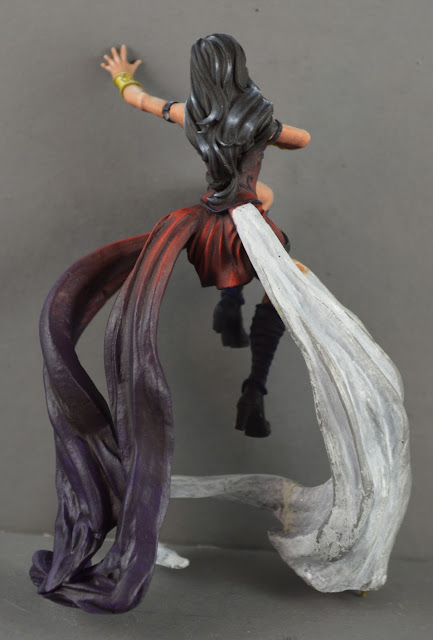 Posted by MiniPainterJen at 6:28 PM No comments: