I haven't gotten very far, as most of my time has been taken up with furniture moving. The good news on that front is the carpet is getting installed tomorrow. Of course, that just means this week will be spent moving furniture back.

But I did continue work on his arm. I've got a first round of highlights in. 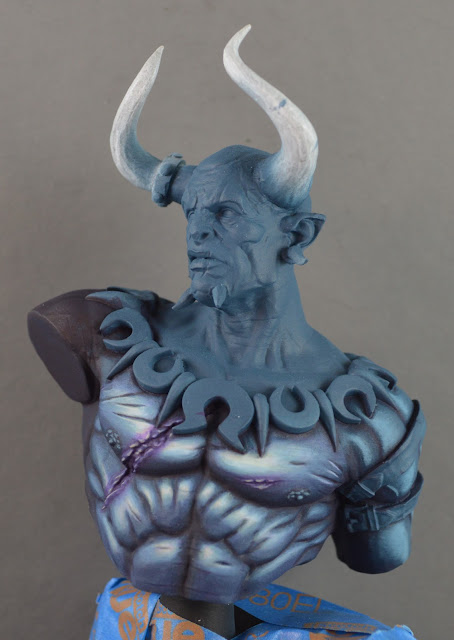 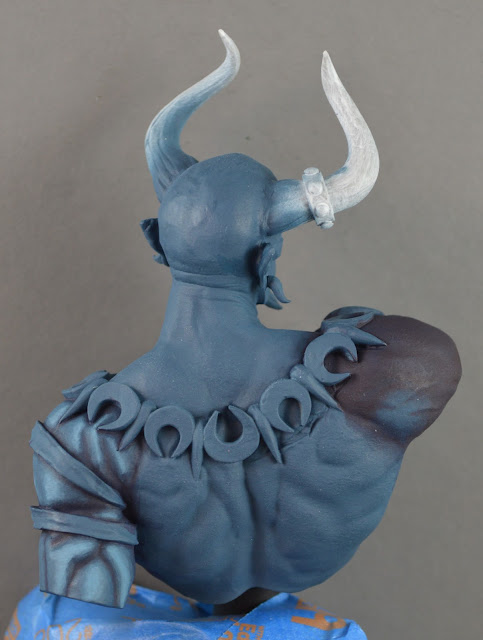 Posted by MiniPainterJen at 1:43 PM No comments:

Today I got back to the demon. I didn't have a lot of time or a lot of energy for work that would take a lot of care, so though I'd been planning to work on his face I went to the arms instead. The right arm is going to have a big armor plate over it, so I just shaded the whole thing. The left arm I got a first round of shadow on. 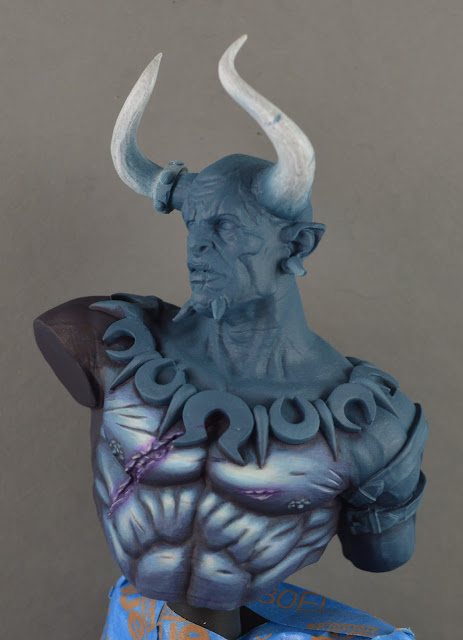 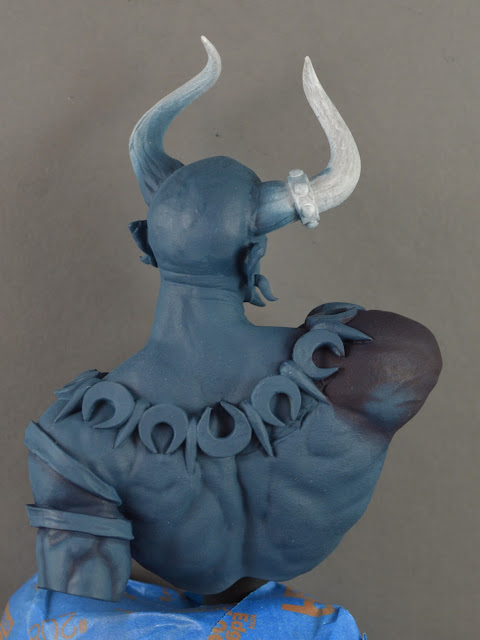 I also got some work in one my corals this week, but they don't look different enough to be worth getting new pictures of. Also, a friend has offered to bring me some real coral bits in a couple weeks, so that project is probably going to go on hold until then.

Posted by MiniPainterJen at 7:04 PM No comments:

Demon: Highlights and More. Base and Bits.

I actually got quite a bit done today. Here's more highlights, some glazing, and some work on the wounds/scars on the demon: 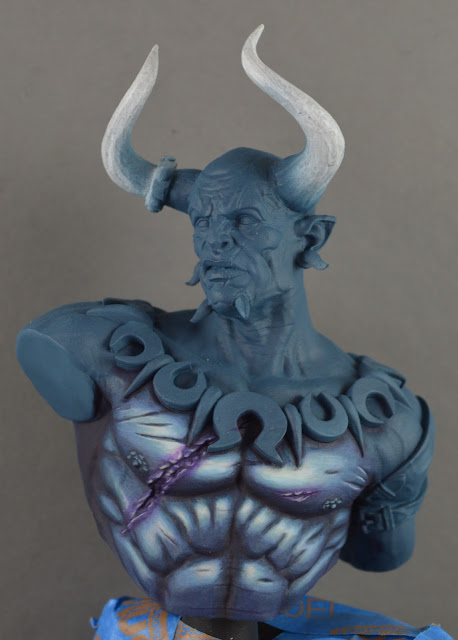 I hit a point where I had to stop futzing with it and set it aside. I'll come back and take another look after a while...I can't decide if I like it, don't like it, feel that it need changes, or what. It might be that I need to get more of it done and it'll look weird until then...I'm not sure. I still feel like it might be too much highlight. I think I like the wound treatment, though. 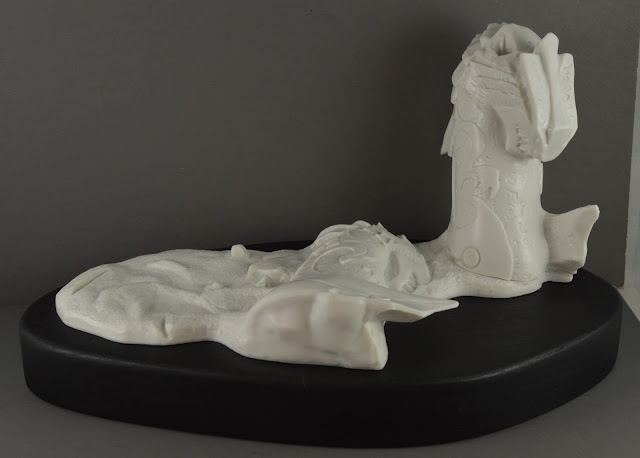 And here's the base I started. The plastic integral base is glued on now. I'm going to put some sandy paste on there to ease the transition to the base, probably to cover gaps where the upright piece was glued on, and also just some other areas to give it more feel of being underwater and having gunk build up over centuries. I also plan on adding some coral bits. I want to spend time this year working on basing and building, and this is my start.

So I need some coral bits for that piece. I started making some. The brain coral was probably the easiest. It's just a couple balls of putty with the grooves put in with a pointy tool. Then I used a stiff sponge to texture the surface.

The branched coral was the next easiest. It's just woven wire (I previously used it to make a tree), unwoven and then re-twisted into those shapes. Hmmm...maybe I'll do a tutorial page on that. Anyway, once I had it shaped the way I wanted, I covered it with this stuff I found in a bin: 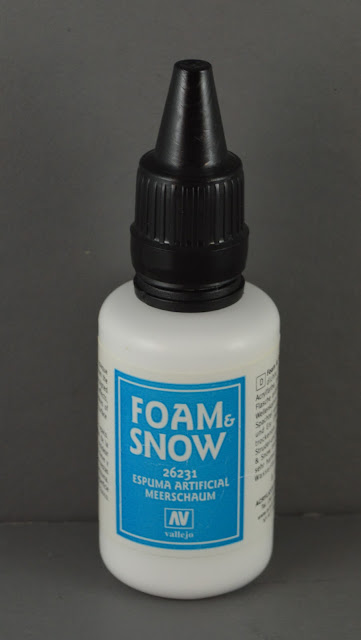 I was hoping that it would have a little texture, but it doesn't. It's like paste or putty, but a bit thinner so it can be brushed on to things. That part is really convenient. However, it's not doing as good a job at covering the twisted wire texture as I'd hoped. It's possible a thicker paste would be better for that. I'm putting on multiple layers and that's helping some. Given the scale of the piece, I might be able to get away with not completely covering the twisted wire look.

The tube coral I'm still working on. I found some hollow plastic tubes to start with, yay! Perfect! Then I cut them with sprue cutters, which was not a great choice, as it distorted the tube shape. I should have gone and got the proper tool for that job. But I pressed on. Then I saw that in my reference photo, the tubes were tapered. I tried a couple ways to make that happen by cutting the tube and trying to turn it into a cone. That really didn't work out at all. So, I ended up gluing them to some of the wire, then using putty to make the cone shape at the bottom. It's not great, but I may be able to clean it up a bit more.

Last was the flat stuff. I tried a couple different weights of paper before ending up with the green stuff. It's definitely the least effective of them all. I was aiming for a rosette kind of look, and I was really unhappy with it...but looking at it now, it doesn't seem as bad as I originally tough. I also noticed some other flat kinds of coral in some of my references that I might have better luck replicating, so there's more work to do there.
Posted by MiniPainterJen at 3:17 PM No comments:

Finally back. I started on highlights on the demon tonight. I'm reasonably happy with it, but I think I need to back off the area of the highlights some. 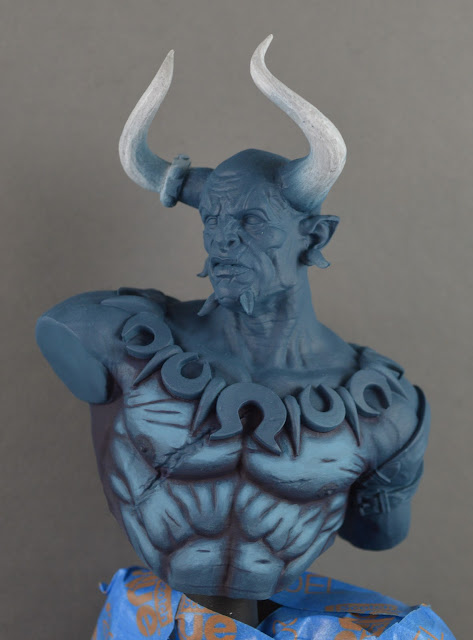 I think I'm going to have to decide what to do with the wounds pretty soon.

I did get some work on this base in this week: 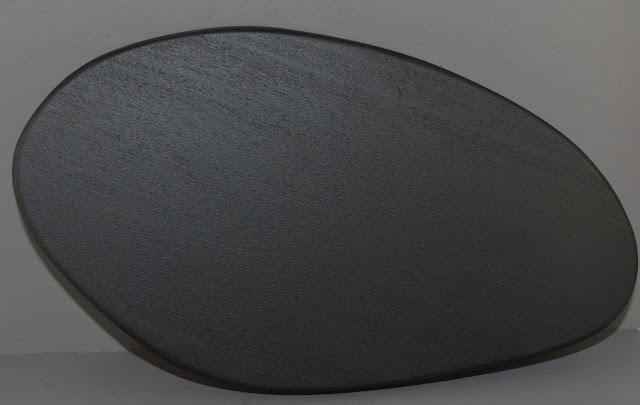 This is for a large piece that I'll be doing in chunks. More to come!
Posted by MiniPainterJen at 6:42 PM No comments:

After a long week, I finally got back to the demon today. I added another round of shading on his chest. 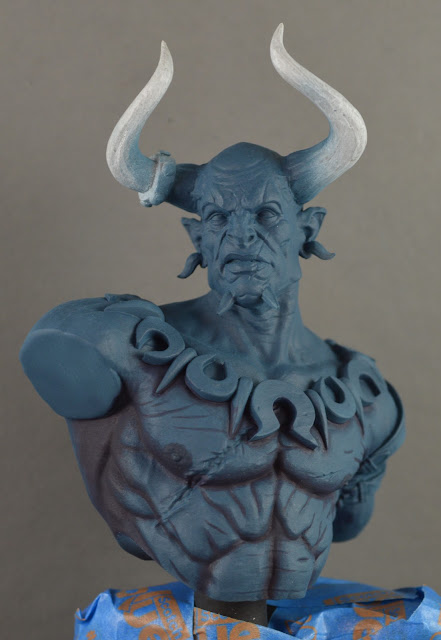 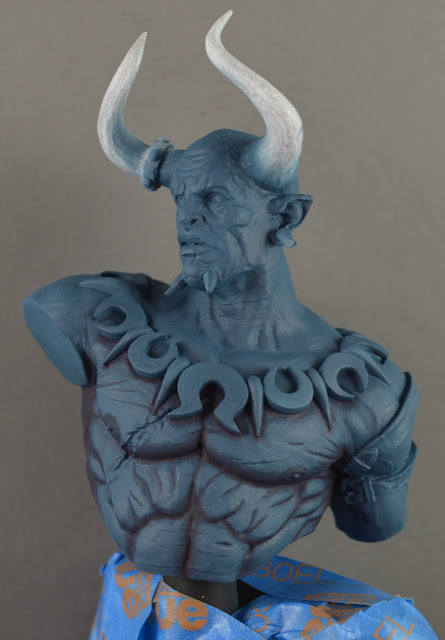 I can see a couple areas I need to to back and smooth, but so far I'm pleased. Next will be highlights.
Posted by MiniPainterJen at 4:46 PM No comments: