What I did on my vacation

Got my stuff back from ReaperCon today. Here's what I worked on while I was away.

The assassin: I shaded and highlights his clothing, and put a base coat on the armor bits. Was having a really hard time with the blue - it was such a dark, saturated color, I was having trouble getting it to look right. Putting the base coat on the armor actually helped a lot; after that, everything looked a little better balanced in color and tone. Per suggestions from the Reaper painters (one of the benefits of going to the con as a VIP was the ability to get input from them pretty much at will), I brought the highlights way up on the blue, and also glazed the purple to make it more saturated so it would play nicer with the blue.

This model also shows one of the risks of travelling with minis - a fair bit of paint chipping and rub off, which I will have to fix. Also, when I unpacked him, his sword was badly bent. At least it only had primer on it, so I didn't lose my paint job there, but I'll need to re-prime it, and I'm lucky the sword didn't break off entirely. It was pretty badly bent. 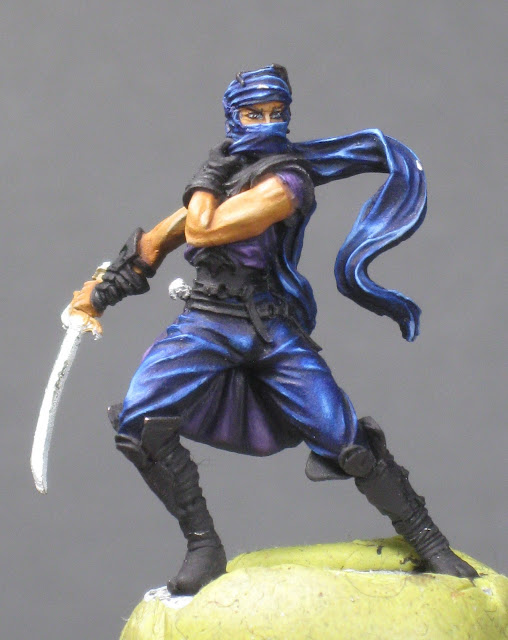 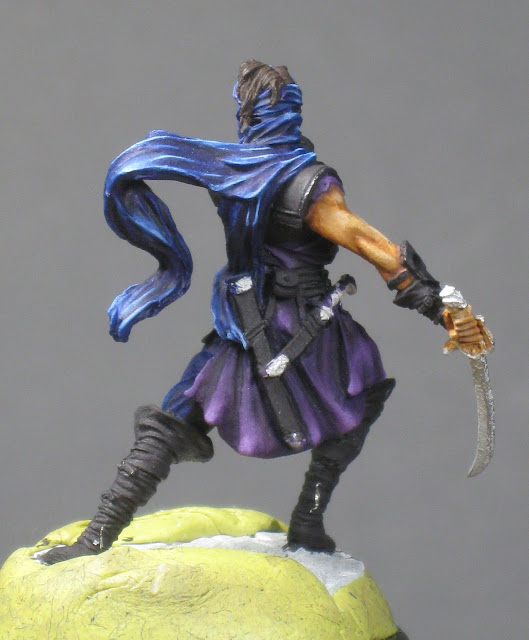 Worked on the ghost as well. I shaded and highlighted her skin, but I will have to clean it up and smooth it out a bit. The lighting was not the best, and I slopped over a couple bits when I put the base coat on the rest.  I also blocked in where the highlights are going to go on her hair. I took a class on hair while I was there (thanks, Sue!), and the instructor suggested treating hair like a helmet and painting it as a whole thing rather than focusing on the sculpted strands. I have my class piece, I'll get a picture of that and it will make more sense.

If you'll notice, there's nothing helmet-like about her hair. So, I went to Sue to get suggestions, and she said to take it in sections instead of as a whole. I wanted to make sure I had the highlight placement right before I left, so with many trips back and forth to Sue, this is what I've got. I need to go back and smooth it in, maybe put in some deeper shadows, but at least I know where everything will go. 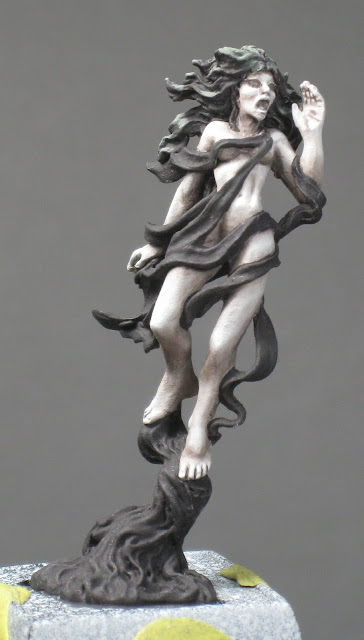 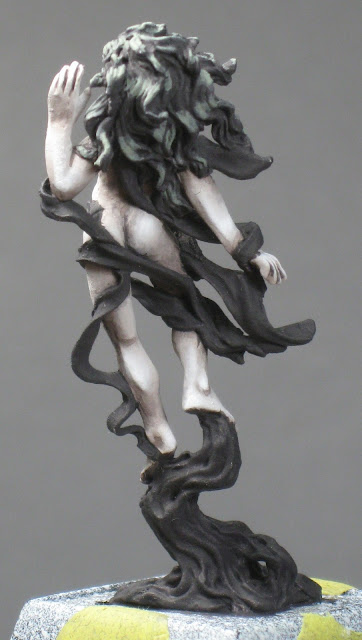 And, started the flesh on her. I was working on two things here. One, using non-flesh colors for shading and highlights. I took a class on being adventurous with color (thanks, Michael!), and so just started this to think about that. I've also got a class piece from that one I can get a picture of. Anyway, I used a flesh base tone, then a red-brown shadow. I didn't get to a highlight color before I had to pack up. Oh, I also went with way dark lining on her. I also tried a trick to make areas with fuzzy primer or an otherwise rough surface smoother, which is to cover it with a coat of brush-on sealer. It does help, but it only goes so far. 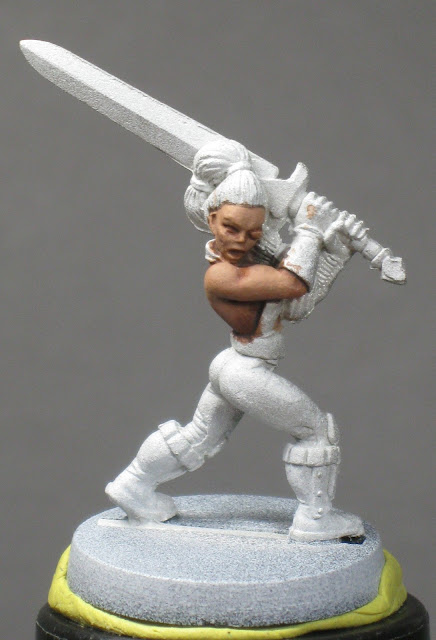 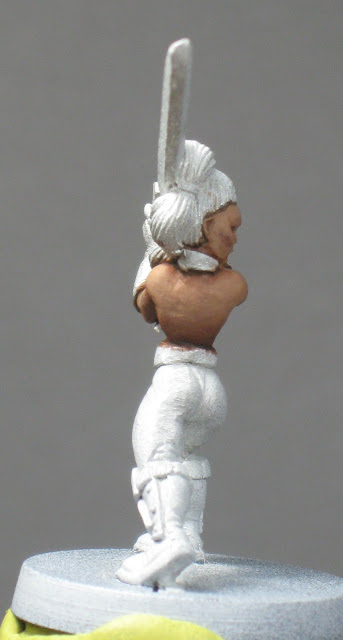 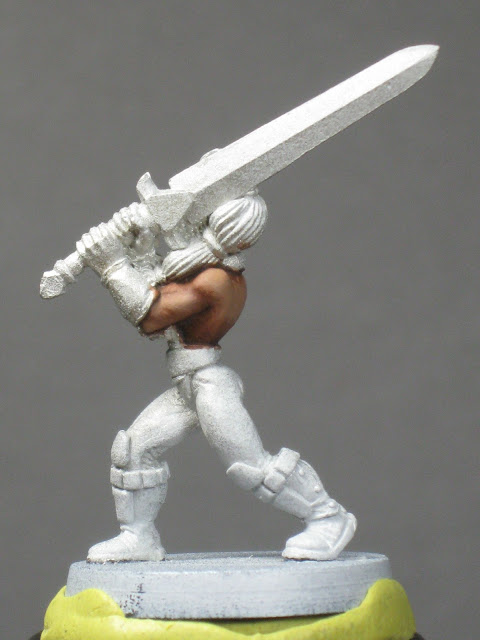 The lamp, assassin, and ghost are almost all done, so I'm going to try focusing on them to get them finished. I've got way to many in-progress projects.

Speaking of the lamp, I'd been trying to figure out how to get a real example to look at. Then I thought, well, duh, I could try the one in my front yard... 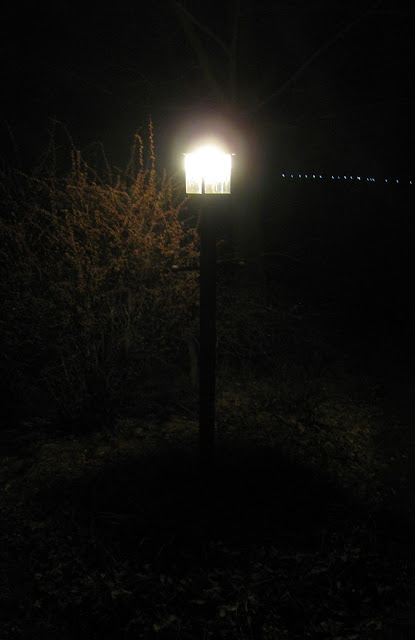 Taking a picture of a lamp at night is a bit problematic, so in the copy below I've brightened it up a bit and annotated the parts I'm interested in. Note how the light is very bright on the parts of the frame around where the bulb is, and there's a little light on the cross pieces. The rest of the post is in  shadow and quite dark. That's what I've got to replicate on the mini...more or less. I'll have to put some highlight on the bands along the post, because it won't look right otherwise. Also not the patch of shadow right under the lamp. That I'll have to try to replicate on the base. The bottom of the lamp housing blocks the light from going that direction, and keeps the area right under the lamp itself in shadow. 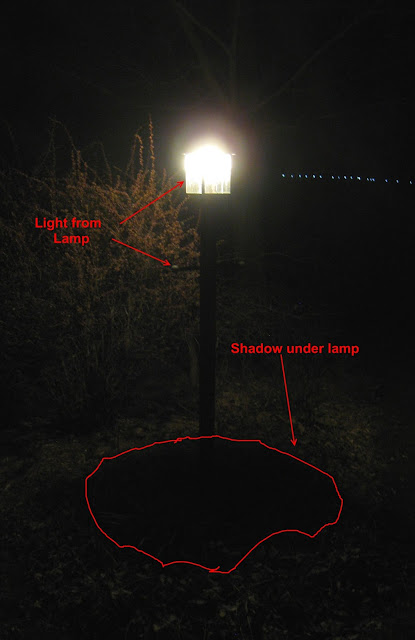 Posted by MiniPainterJen at 6:14 PM