I spent most of this weekend doing prep work on some things that will be my next projects. There's four of them, which is really too many, but so be it.

This is Jynx from Hasslefree: 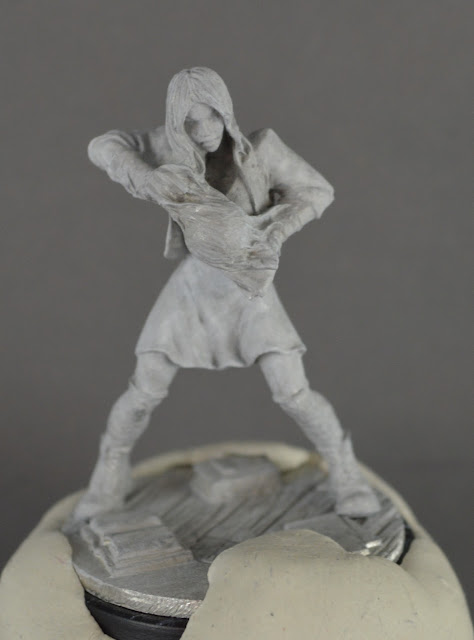 She is based, primed, and ready to paint, and should be pretty quick. Which is why I decided to work on her, because the other things I have are going to need a lot more pre-paint work. She just needed a minimal bit of cleanup and to get attached to her base.

Next is Kalee, also from Hasslefree. 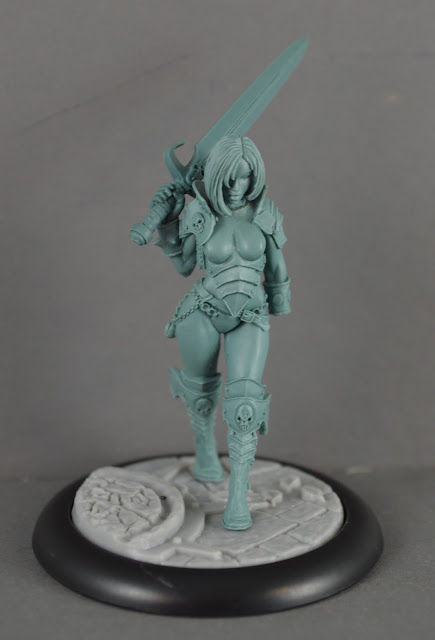 She's a 40mm figure, which is kind of an unusual scale. She's mostly together, but needs a little gap filling where here head is attached. Also, there's a scabbard that's supposed to hang off her belt on her left hip, but as the figure is now it won't fit in there. I need to warm the resin and bend her arm out a bit at the shoulder to make room. Even if I do that, it's going to be a pretty tight fit in there. So I'm debating whether I want to put the piece on or not. She also has a shield that will go on her left arm, but that will have to be put on after paint. It covers a bunch of stuff. I want to put the pins in it so everything will fit when I do that, but first I need to decide if I'm going to move her arm.

Here is Zahra, from Arena Rex: 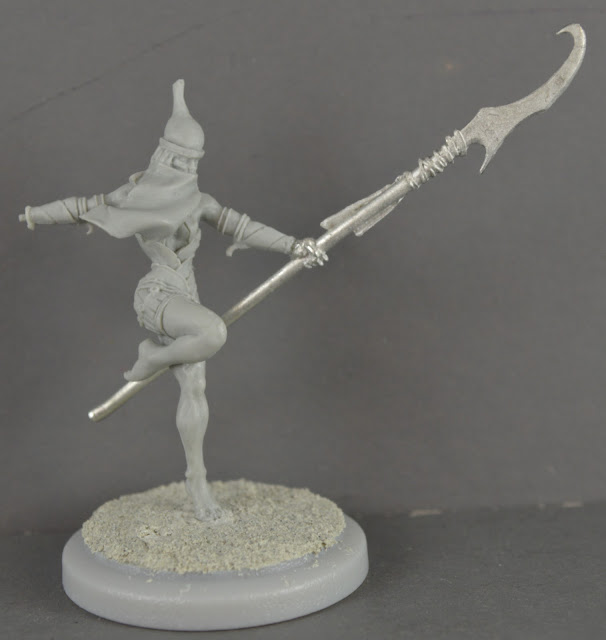 Her other hand is holding a whips that kinda circles around the figure. It's going on later because it'll be in the way of pretty much everything if I put it on now. It's also metal, which makes it less fragile than it would be if it were resin, but it means that it bends easily (and eventually all the bending will lead to a break). So that weapon is going on later. As it is, this piece is going to be a challenge. The point where it attaches to her base is very small. Also, she needs some gap filling where there were bubbles in the resin.

And last, is some kind of sorceress from Ares Mythologic. I don't think she has a name, so I'll have to think of one. This is a 54mm figure. 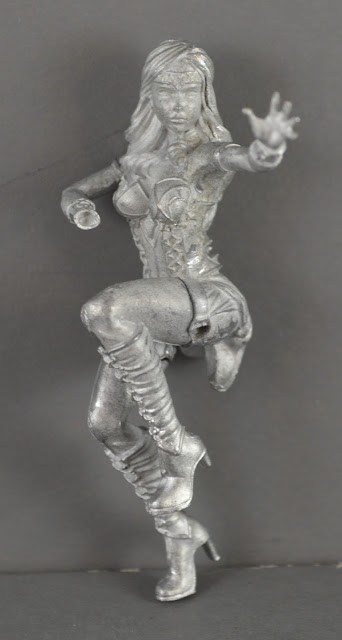 I've put together her main body here. Her missing hand has a sword that will a. be in the way of painting and b. is again thin and bendy, so it'll go on later. I've done that dance with bendy swords before, and it is not fun. I have some gap filling to do on the leg joins here, and then I can see about putting on the rest of her pieces. The sculpt is meant to be kinda floating in the air, and it uses these long pieces of cloth  from her clothes to hold her up. There's also a base that came with her...I may or may not use it. Putting her together is going to be a lengthy process with many stages.
Posted by MiniPainterJen at 3:32 PM