Today I worked on his shirt and vest, doing shading and highlighting on them both. 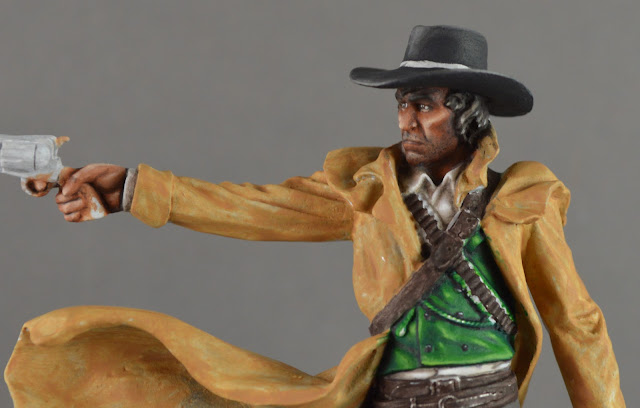 The shirt is done. The vest still needs work. I tried doing the buttons in black, and they're just getting lost. They need to be silver instead. Also, I was thinking of putting some freehand on there, which I didn't get to tonight. That may be a little risky - if I mess it up, I'll have to start the vest over. At least it's not a very big area.

I did something I rarely do - I shaded the white shirt with gray. Usually I avoid that; shading white with gray tends to make it look dirty or, well, gray. In this case, I went with it because:

* the browns I'd usually use were too close in color to the coat, so it all kind mashed together.
* the grays are also being used on the hat and pants, so it'll help bring together the different areas of the mini.
* it's the old west. It's OK if he looks a little dirty.

Oh, I also went back and re-did the highlighting on the hat in the same family of grays I'm using for the pants and shirt. I think it would have been OK as it was, but this is better.
Posted by MiniPainterJen at 6:37 PM