I moved on to the cowboy's hat and shirt, and spent a whole lot of time fighting with them. 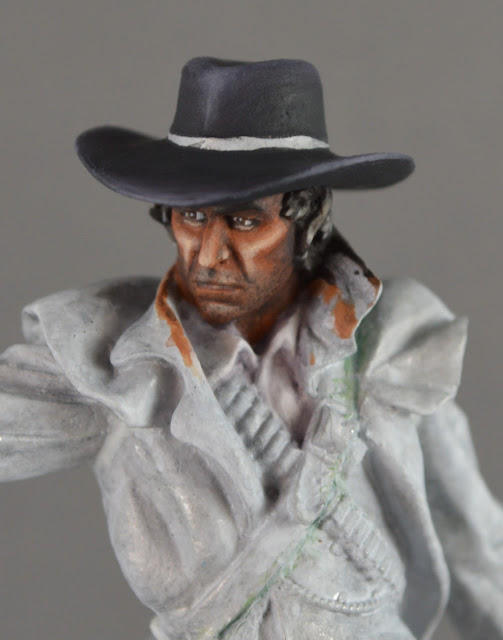 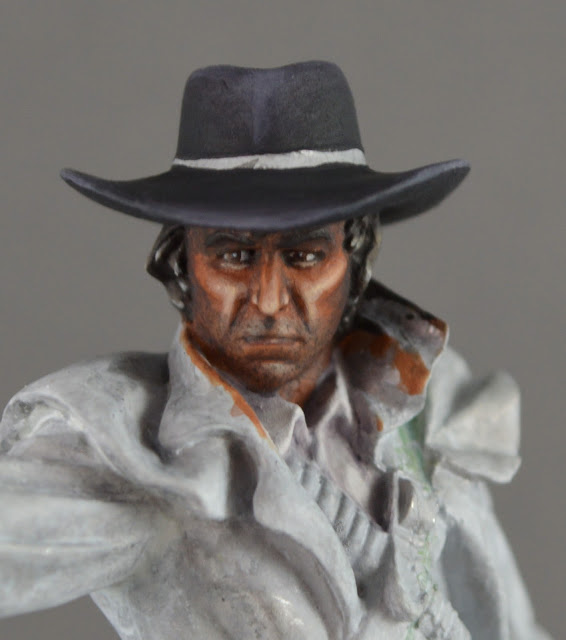 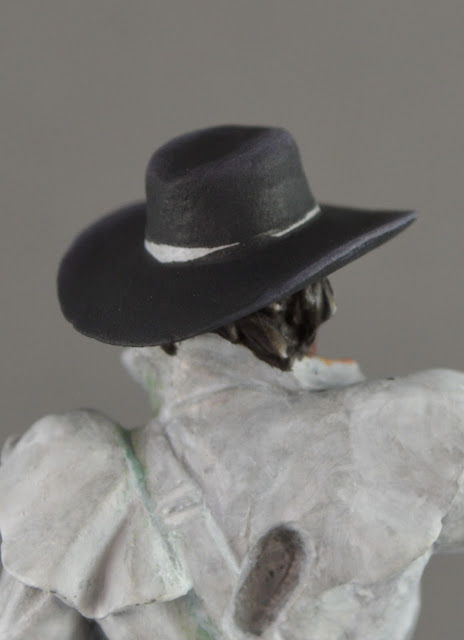 I started with the hat, which got a base coat of my favorite not-quite-black, Reaper MSP Noir Black. That was all well and good. (The band I'm going to make the same color as the various other leather straps and belts, so I'll come back to it when I do those.)

The trouble started with highlighting the hat. I started with some desaturated blues, but they weren't desaturated enough and looked...blue. So I painted over it and thought about it while base coating the shirt.

I had picked out what I wanted to be a cool off-white. Instead, on the figure, it looks kinda...pink. Well, I stuck with it until I could get some shading and highlights on there, hoping that would help.

Then, I decided to go with the Dark Elf Flesh Reaper MSP triad for highlights on the hat. It's gray with a bit of purple, and usually works well for me. It's also in the same family of colors as the off-white I used for the shirt, so hopefully that would bring a little cohesion to the color palette and make the shirt look less pink.

I fought with the placement of the shadows for a while, particularly the one on the front of the brim. I'm mostly happy with it now, but need to bring the brightest highlight color a bit father back.

So then I did some experimental shading and highlighting on the shirt. It was pretty rough, just meant to help determine if it was going to look less pink when finished or not. The short answer: Nope. Dude currently has a pink shirt.

So, next time I'm going to go over the shirt again with a different base color. I'm also rethinking the highlight colors on the hat, as I'm thinking I'll do his pants in a charcoal gray, and if I use something other than that Dark Elf skin color, I'll probably want to use the pants colors on the hat. Luckily, once I figured out where I want the highlights to be on the hat, it doesn't take too long.

Hrm. Maybe next time I'll just do some more base coats of different areas instead, so I can make sure I'm happy with the color palette before I start on shading and highlighting.
Posted by MiniPainterJen at 6:48 PM