Finished the base, worked on the vestal

I did some work on the blood vestal, so there are pictures of a semi-nude below.

Also, some words on why I haven't been painting/posting very often. I live in a part of the country that's experiencing super cold temperatures. My painting area is in an addition on the back of my house which has lots of windows, isn't heated well and I'm pretty sure isn't insulated well.I have a space heater back there for the winter, but when it's in the single digits that's just not enough. So, until we get back to more normal winter temperatures and it's more comfortable to spend time back there, I won't be doing so much painting.

But first, my wood plank base insert. You can see I've trimmed it down to fit into a 1" square base, and put primer on it. It'll be a little easier to see once there's paint on it. 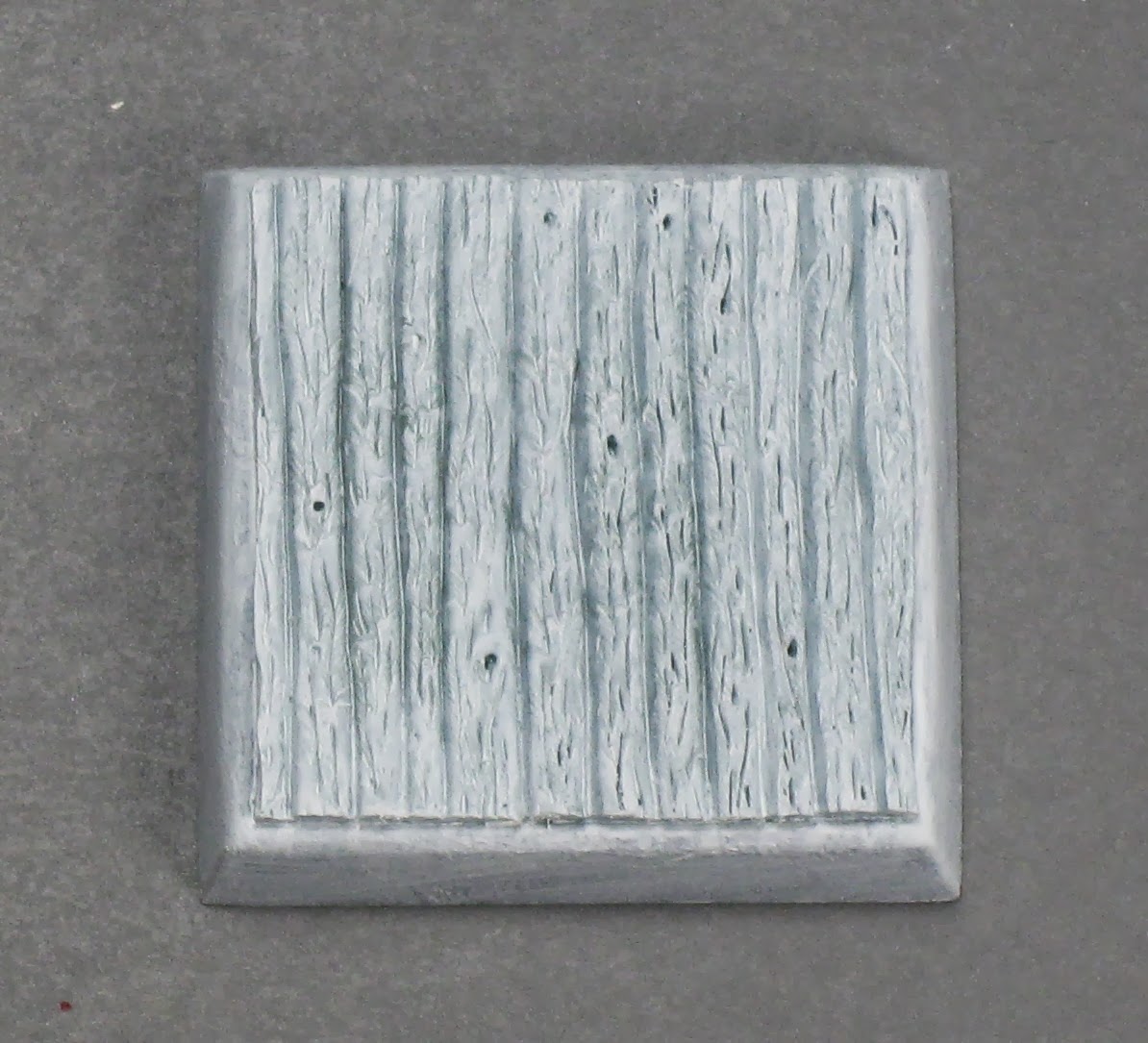 This is a comparison to a metal base insert I bought from Reaper.There are definitely some differences. The purchased one has wider planks, long straight grain, and there are cross cuts where the planks end. Also, their planks are more consistent in width than mine, and I think the texture is more pronounced. Of those differences, I should have put in the cross cuts. I might still be able to do it, if I'm very careful. I might also just leave it as-is. As for the more pronounced texture, I'm going to see how mine takes paint. That'll give me a better idea if I need to replicate that or not. 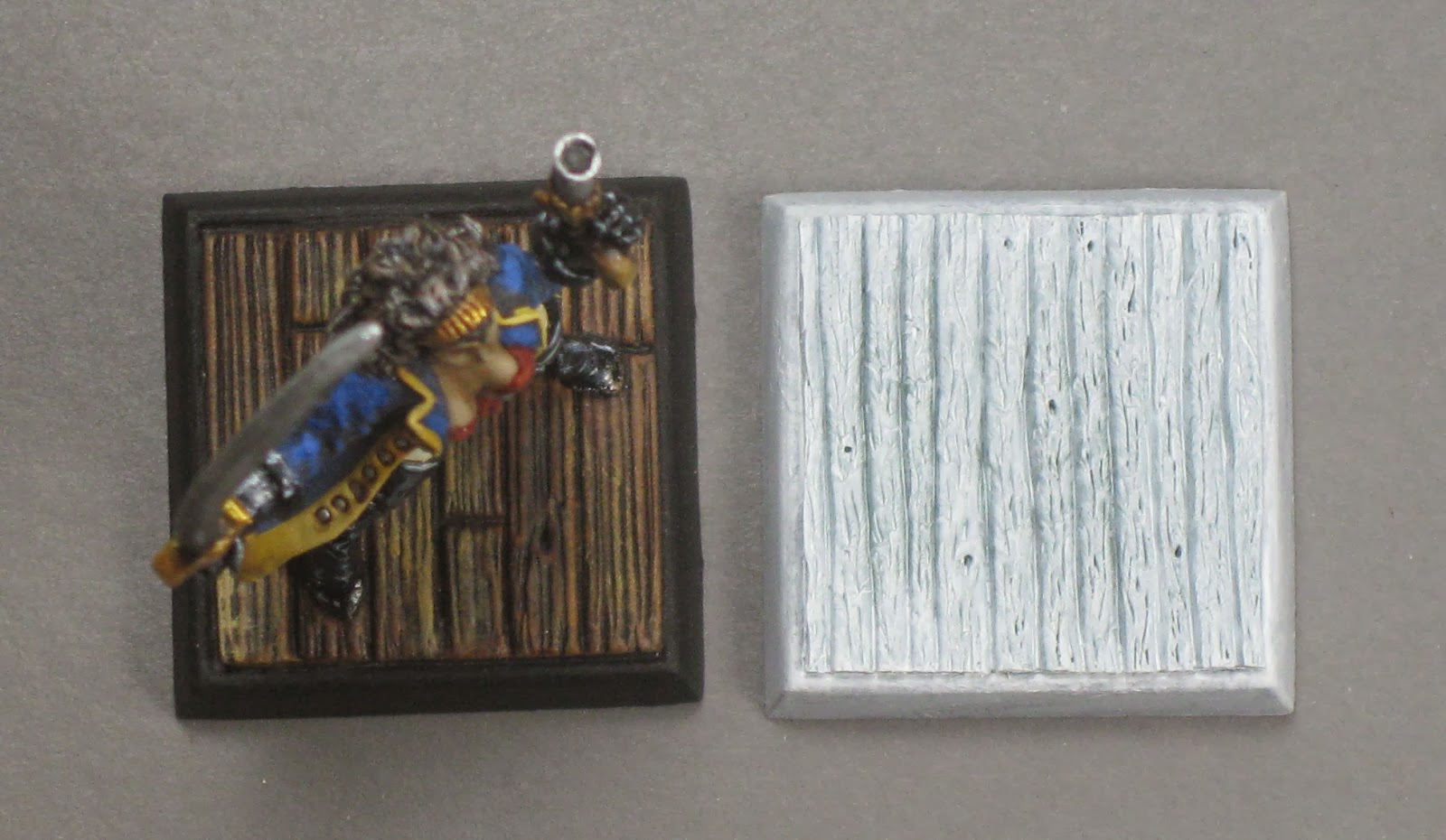 I do have another base insert in the works that I didn't get pictures of. It's just some green stuff that I pressed some sandpaper into for texture. The texture is subtle, so I'm hoping it might be suitable for asphalt.

Also worked on the next practice dummy. I'll finish the sticks next time. On previous versions, I ran into trouble working on that last part. I didn't have anywhere to hold that didn't have soft putty on it, so I'd end up accidentally squishing parts and needing to re-texture them. So, I'm letting this much dry and will finish the rest later. 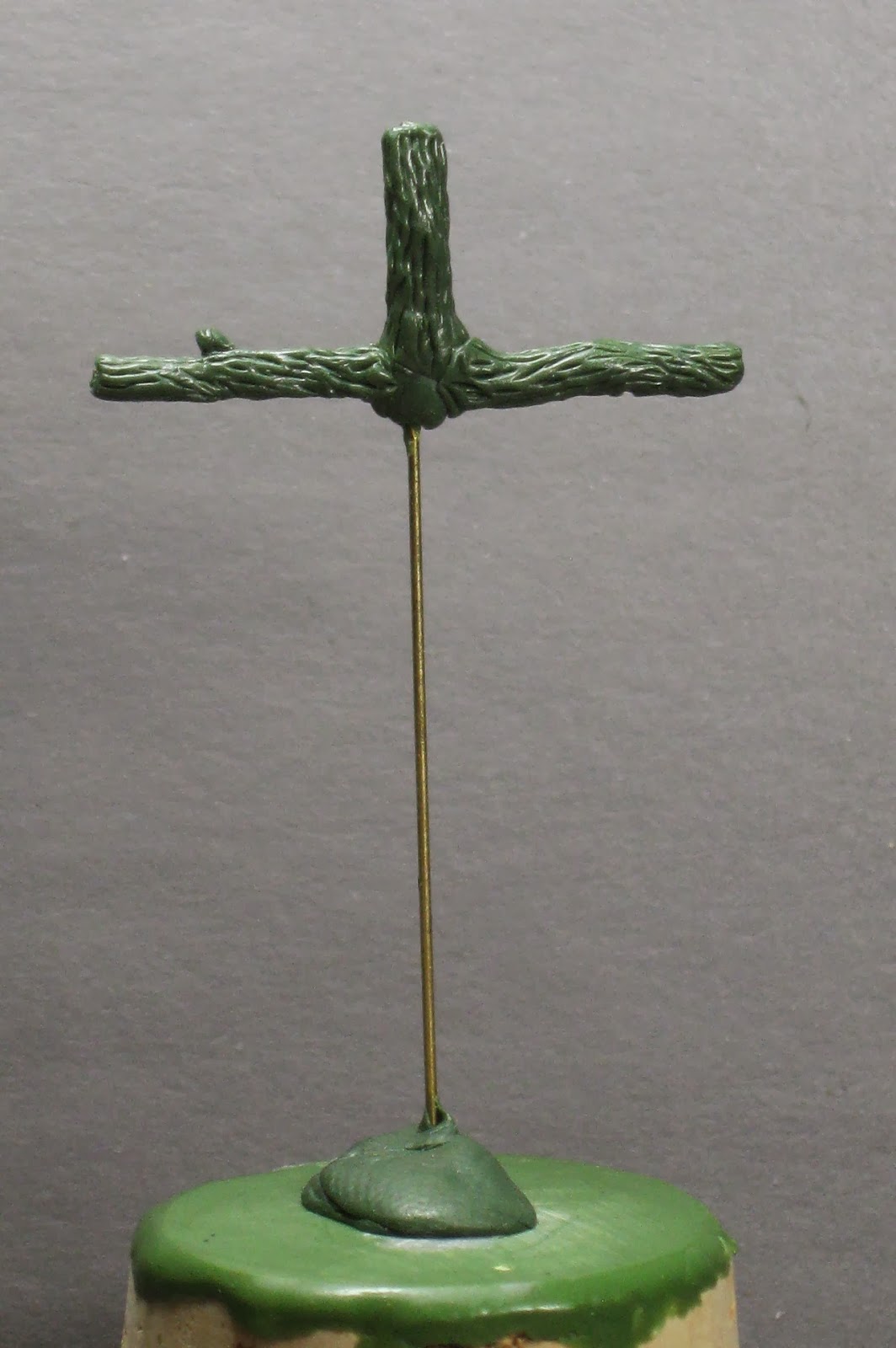 And lastly, I put shading on the vestal's skin. It needs some smoothing and clean up.I'm trying to get a similar level of quality to the previous vestals, but finish her in fewer hours of painting time. Though, since I don't really track how long I spend on a particular model, I'm not going to have any good data to determine if I'm accomplishing that or not. :p I should probably start tracking my hours, if I'm going to care about that sort of thing. 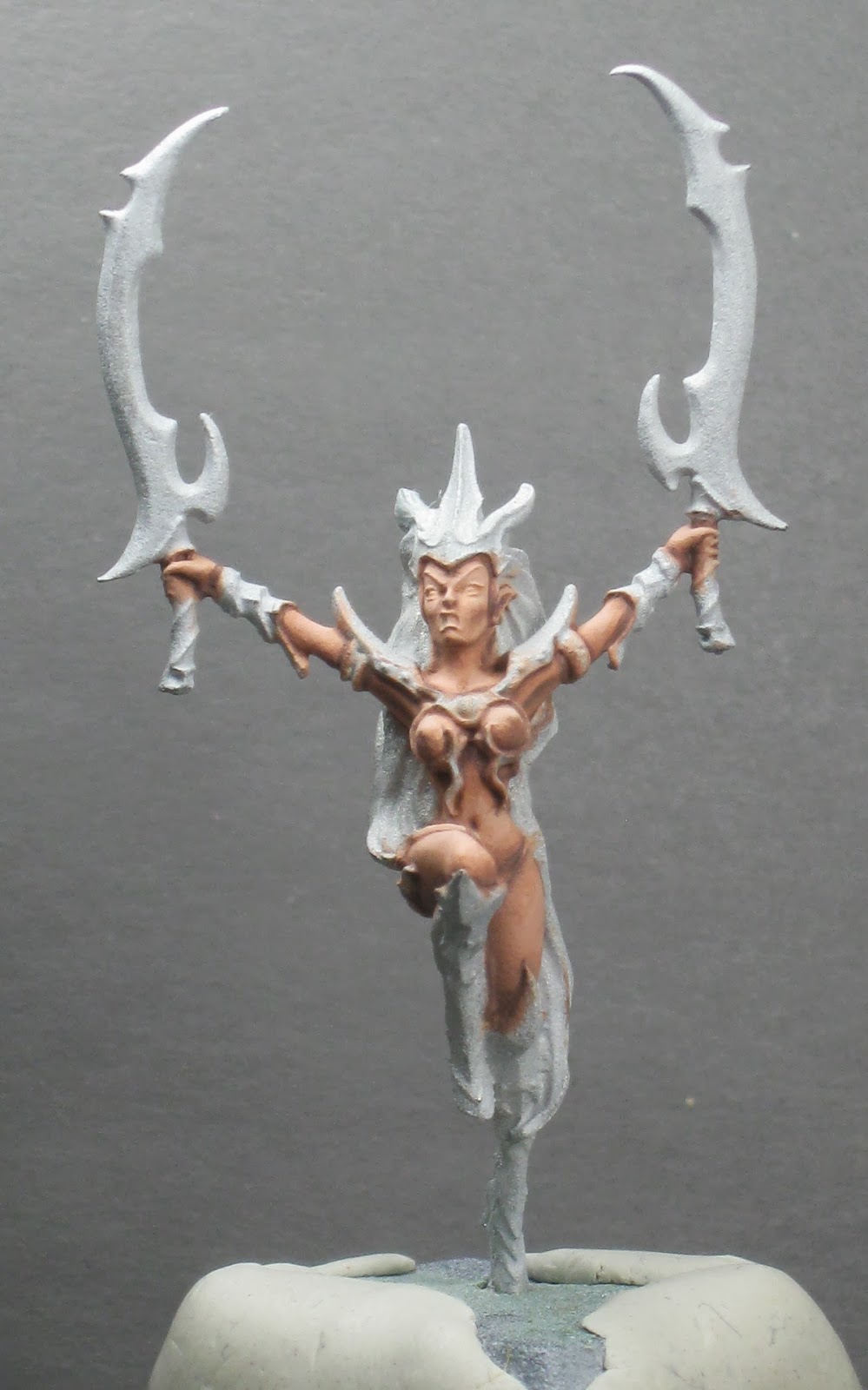 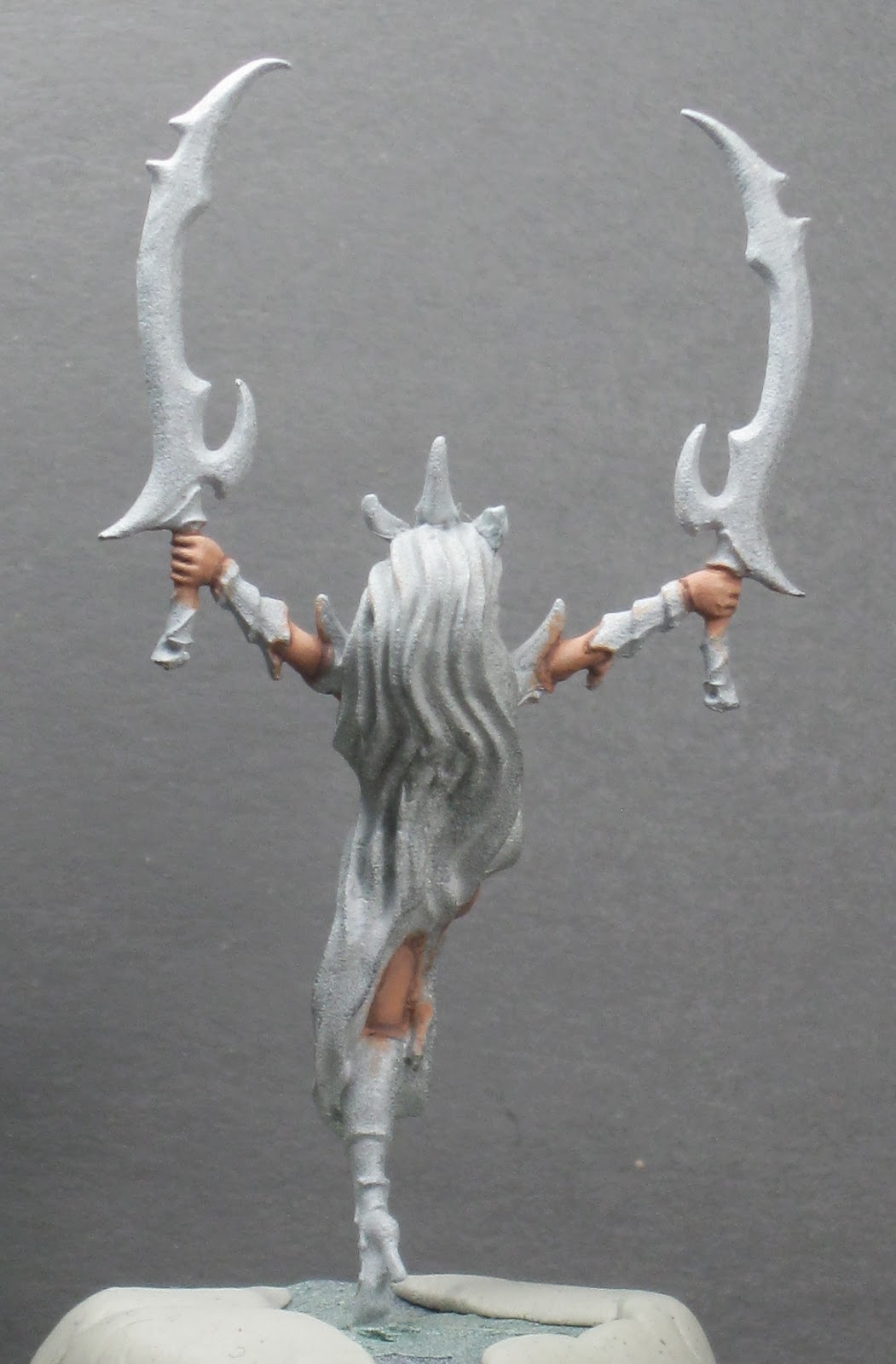 Posted by MiniPainterJen at 4:34 PM