As promised, here's a tutorial on how I did Nandi's skirt. Here's the original:: 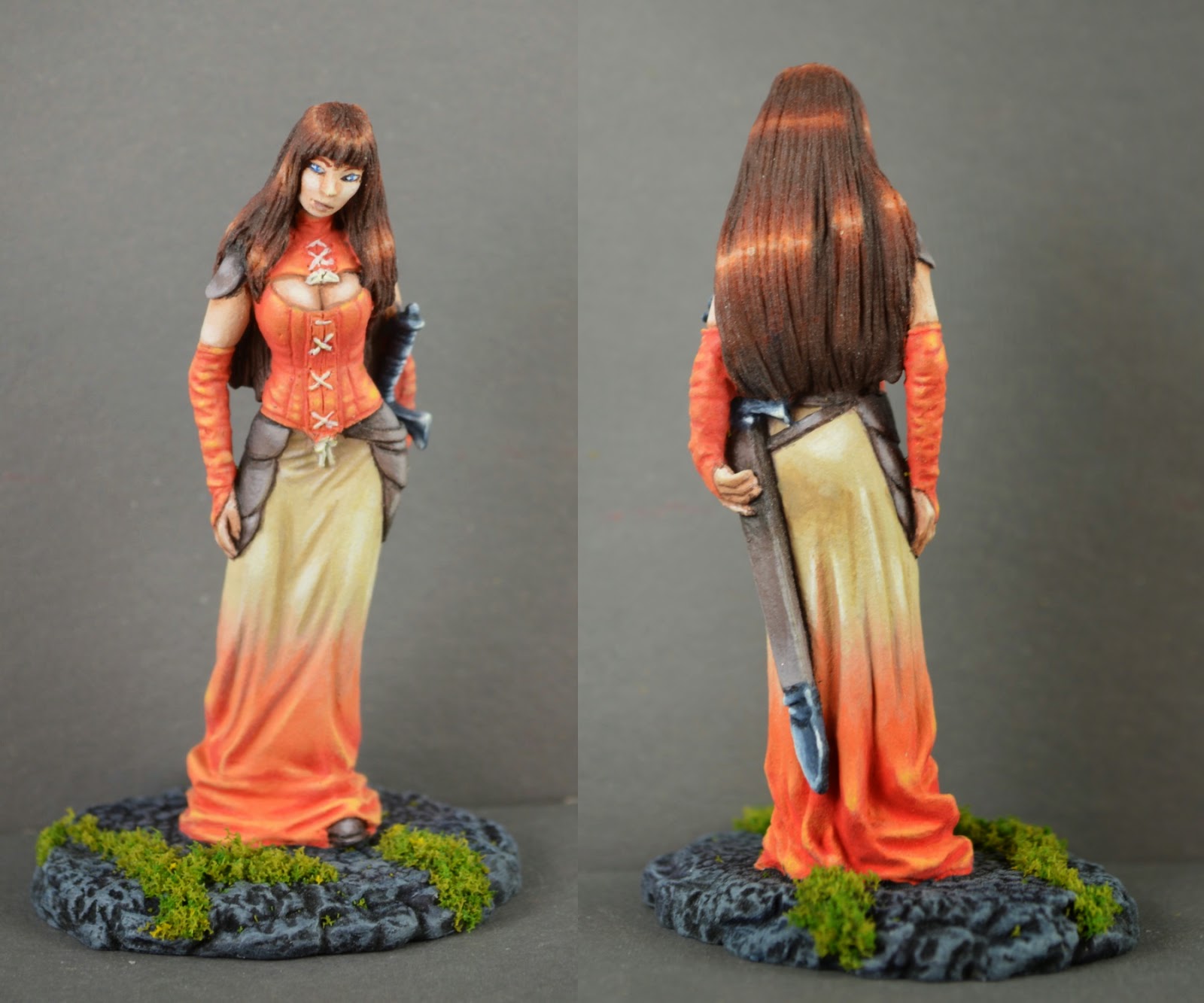 For the demonstration version, once again I'm using Lysette, Female Elf, from Reaper's Bones line (77076). It's the same figure I used in the Nandi's Hair tutorial, which is why she has painted hair. Other than the hair, she has a base coat of Brown Liner to make her easier to photograph and to make the detail on the figure more apparent.

I stared by putting a nice opaque base coat of RMS Yellowed Bone (9143) over the whole skirt. That gives me a smooth base to start from. 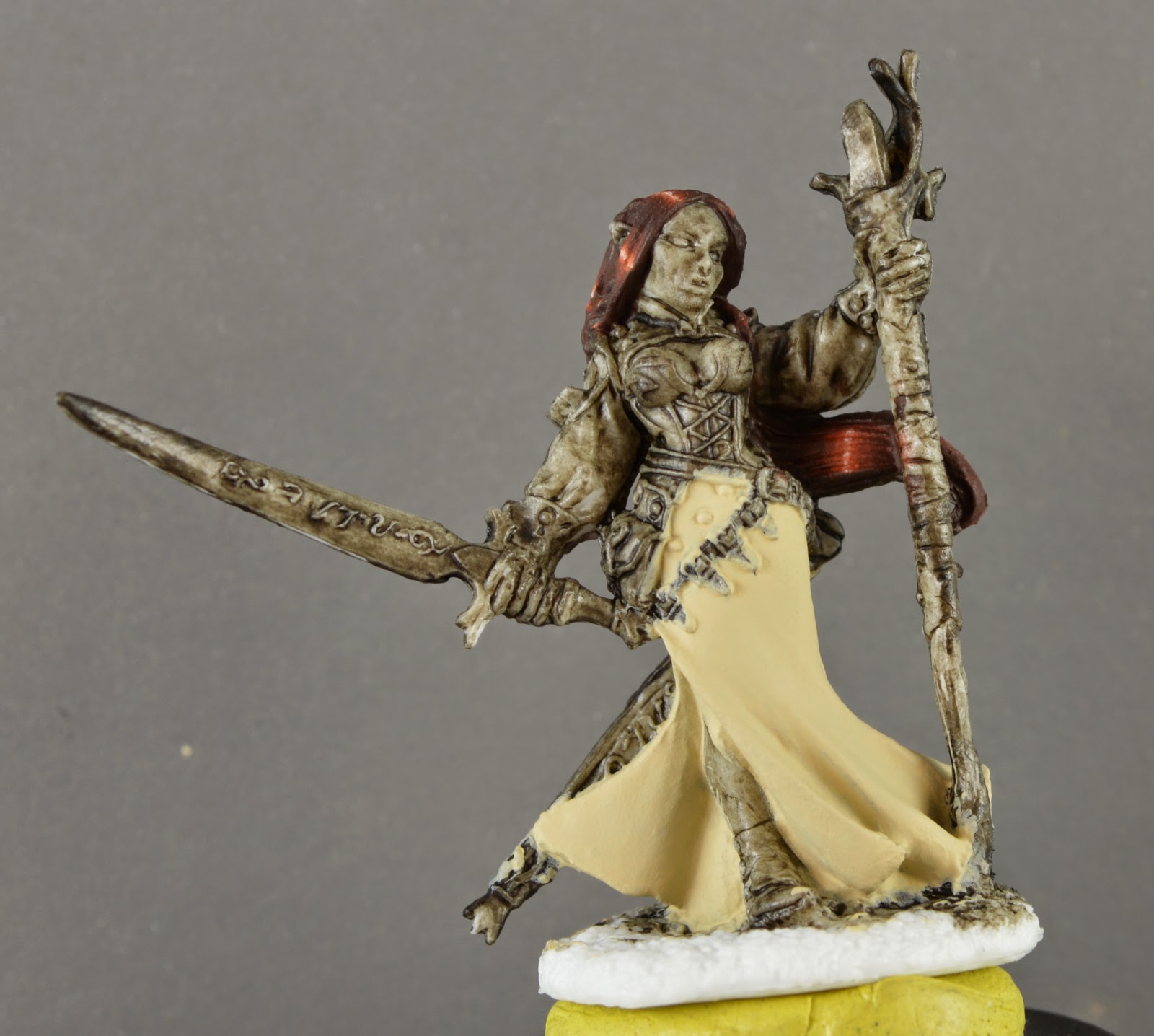 Next, I'm glazing the orange on to the bottom half of the skirt. I'm using VMC (Vallejo Model Color) German Orange (805). I thinned it down to a glaze consistency. Also, since the Vallejo paints tend to dry kinda shiny, I put in a drop of RMS Anti-Shine Additive (9215). I made sure my brush strokes went from the top of the orange area, near the center of the skirt, toward the bottom of the skirt. I want the top part of the orange, where it's supposed to fade smoothly into the beige, to remain light and kind of transparent, but the bottom to be opaque. So, keeping the brush strokes going from top to bottom, that will push the pigment toward the bottom of the skirt. 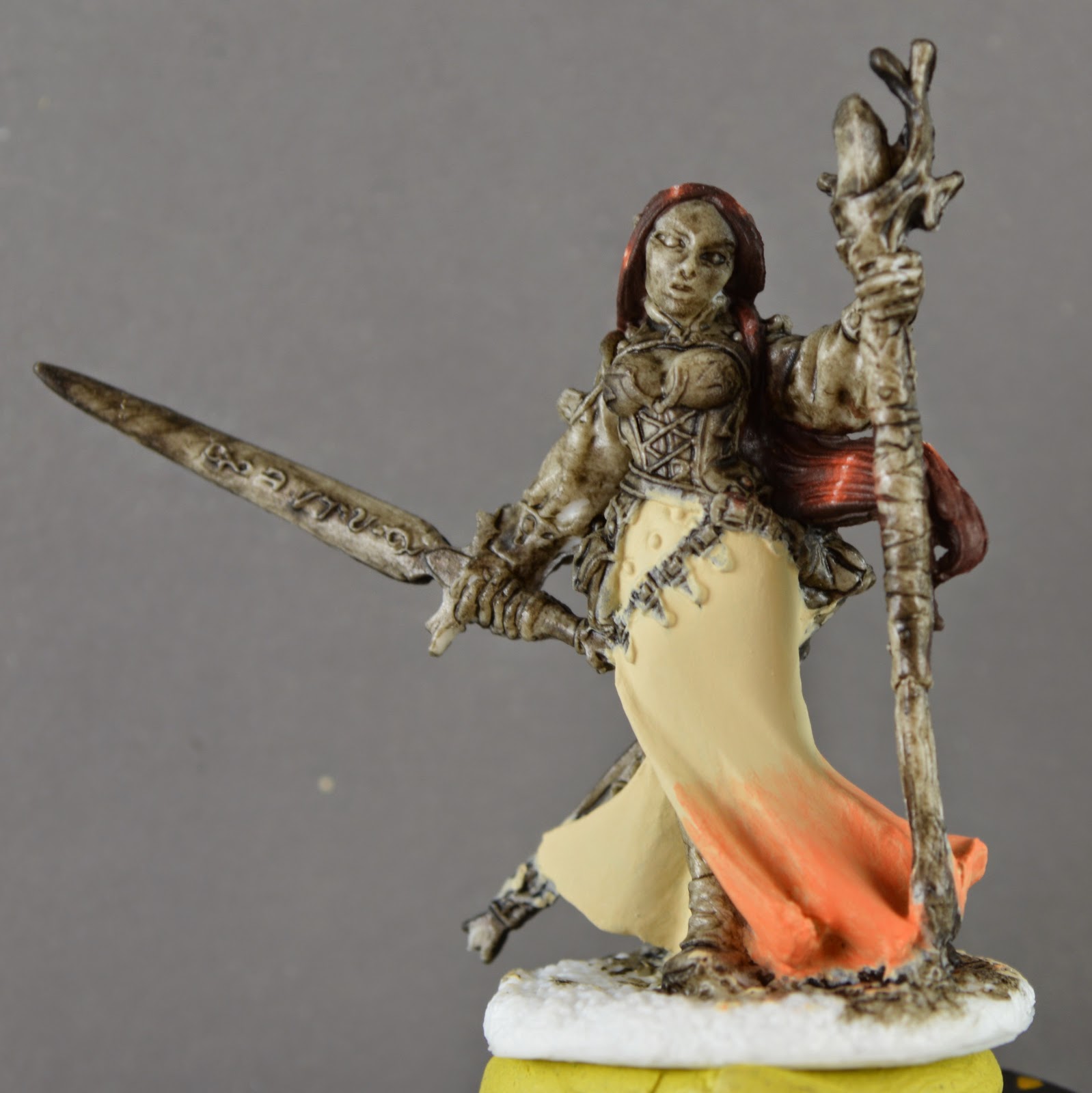 Now, some people would say that if you keep doing enough layers of that with the very thinned orange, it'll build up to the opaque color at the bottom with the nice smooth gradient going from the beige to the orange. Well, that takes a lot of layers, and I don't have that kind of patience. So, I got some more of the orange and thinned it less so that it'd be more opaque and put that along the bottom. 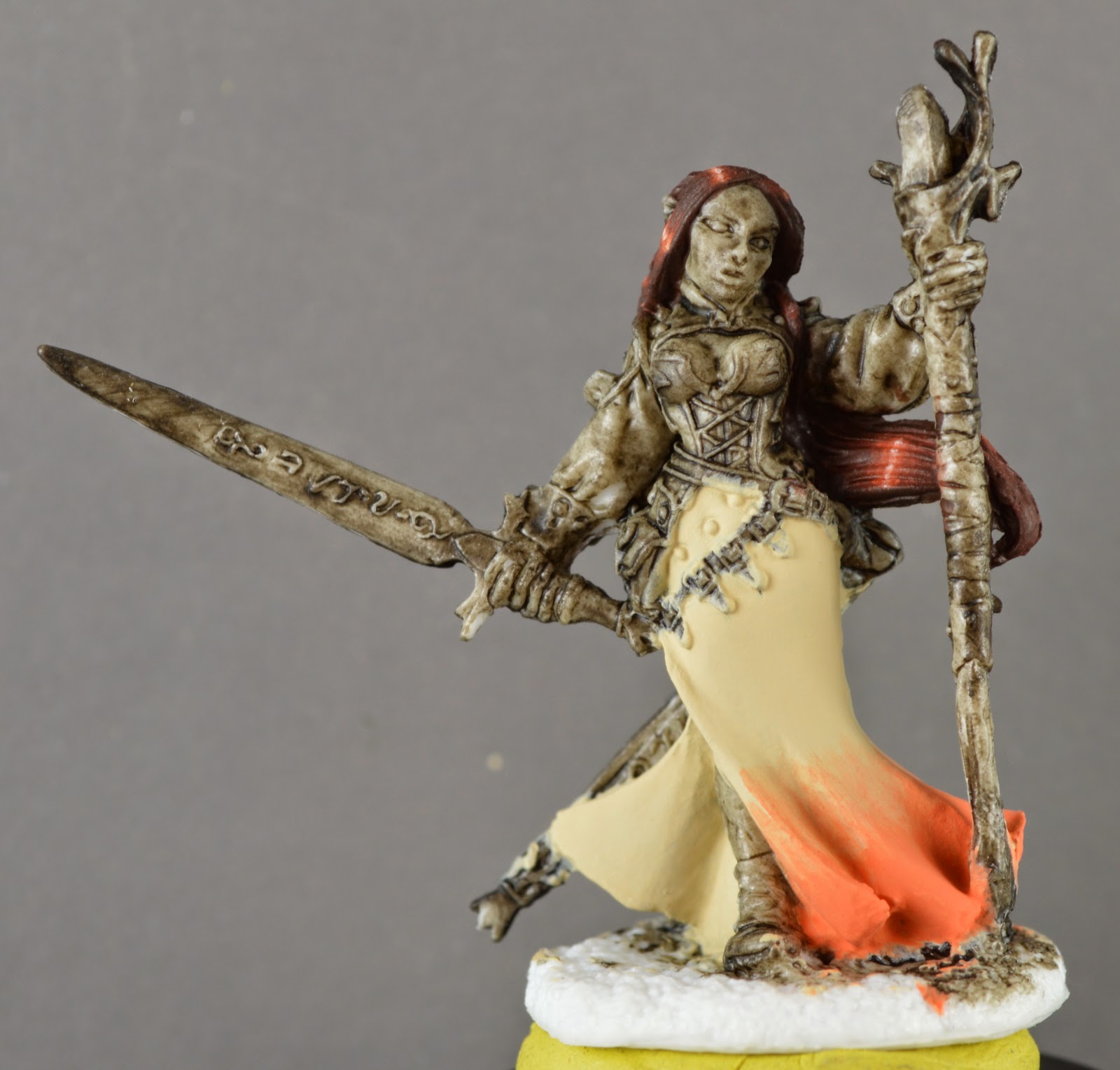 That's better, but now the transitions are awfully chunky. So, I'm going back with the very thinned orange and also some of the base yellowed bone, again thinned to a glaze, to smooth out those transitions. During this step I also make sure that the transition starts where I want it on the skirt, and that it's at a consistent level all the way around. 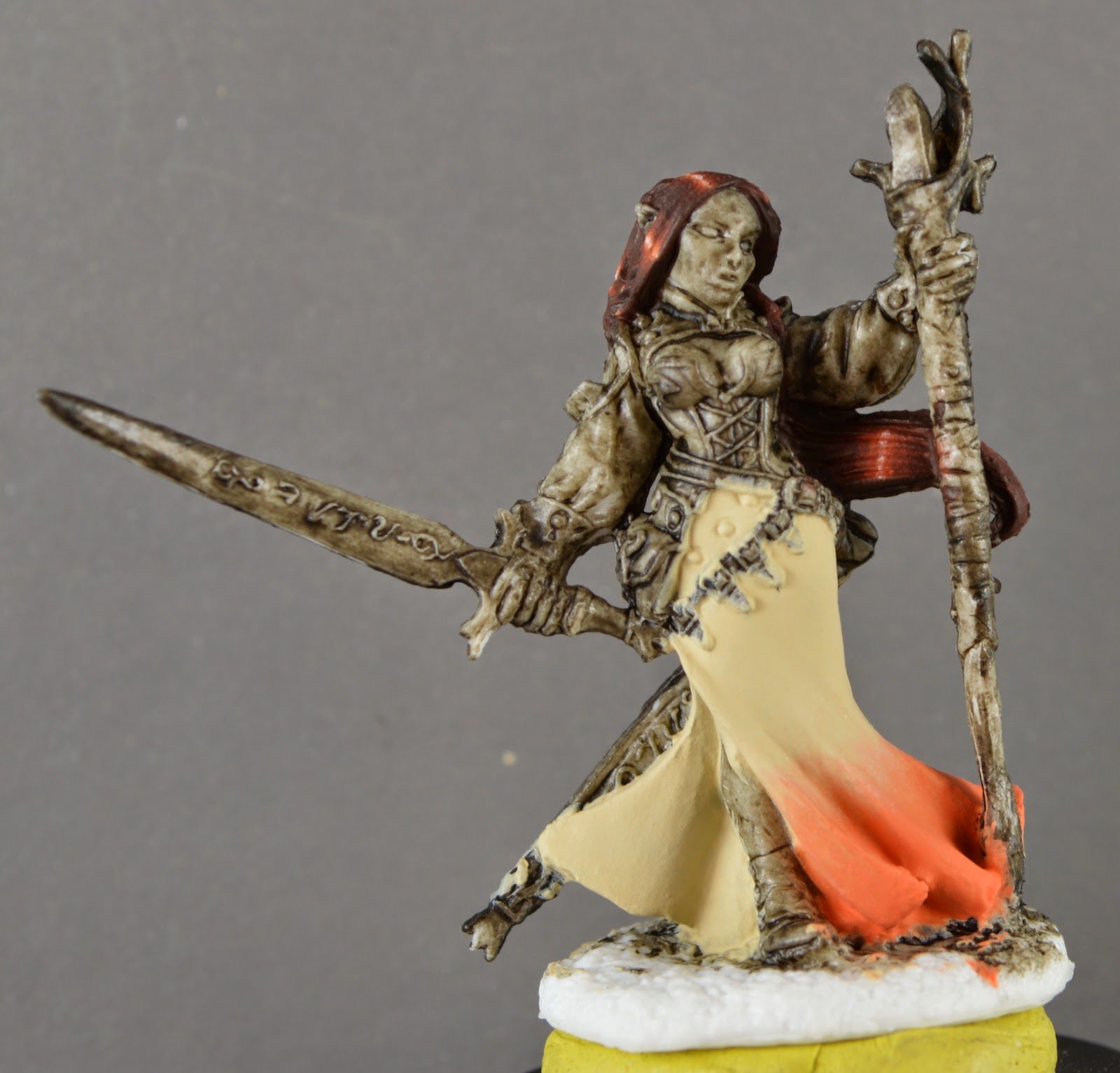 Now I'm going to start shading the orange. I mixed in some RMS Blood Red (9003) with the German Orange. I pulled this shadow up into the transition areas between the orange and the beige, though I left it less opaque than in the orange. I will also bring the shadow color for the top down into that area also, so that the shadows will also be blended between the two shades. 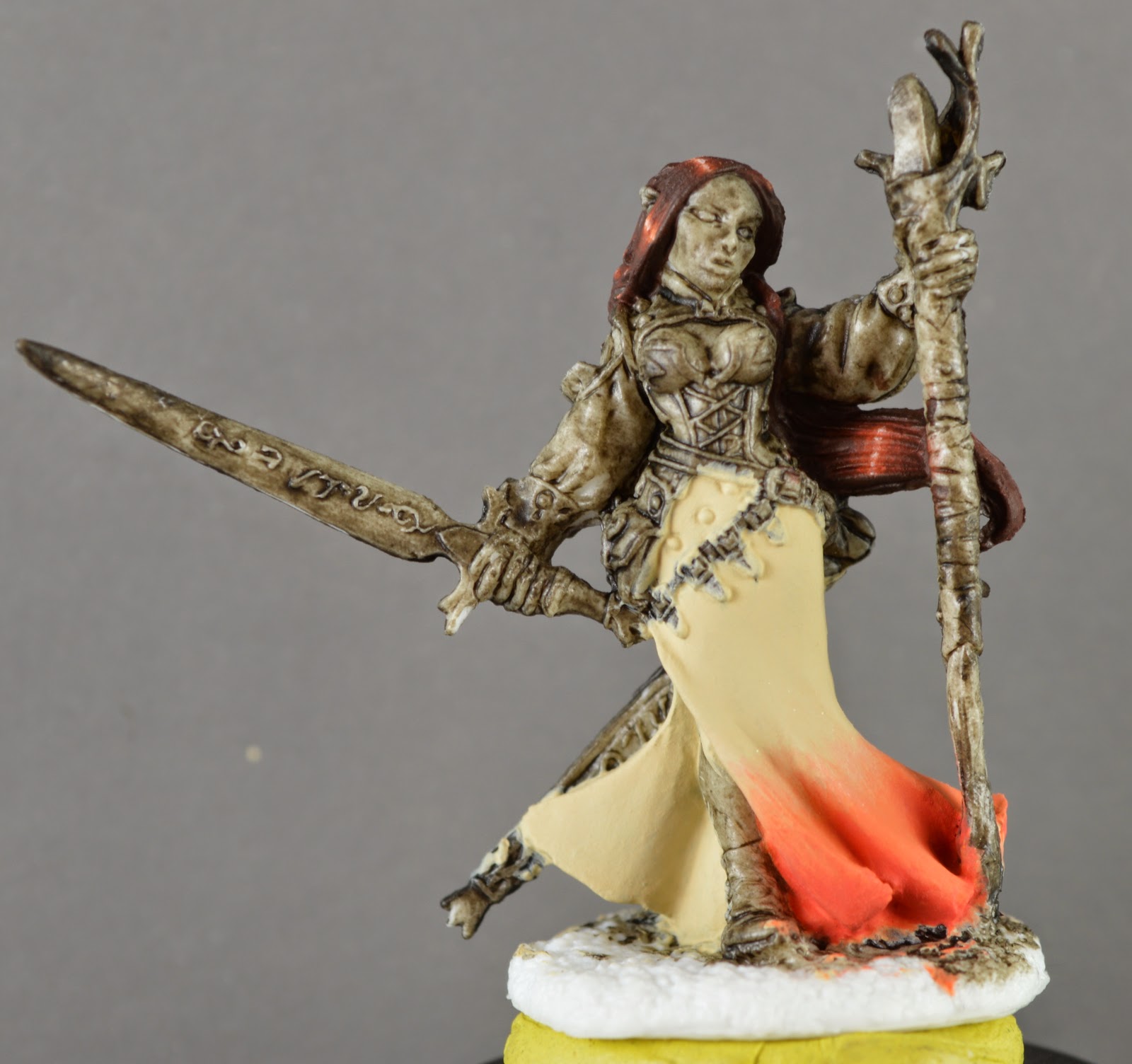 OK,but it needs darker shadows. So, the next mix is mostly Blood Red with just a bit of the German Orange. 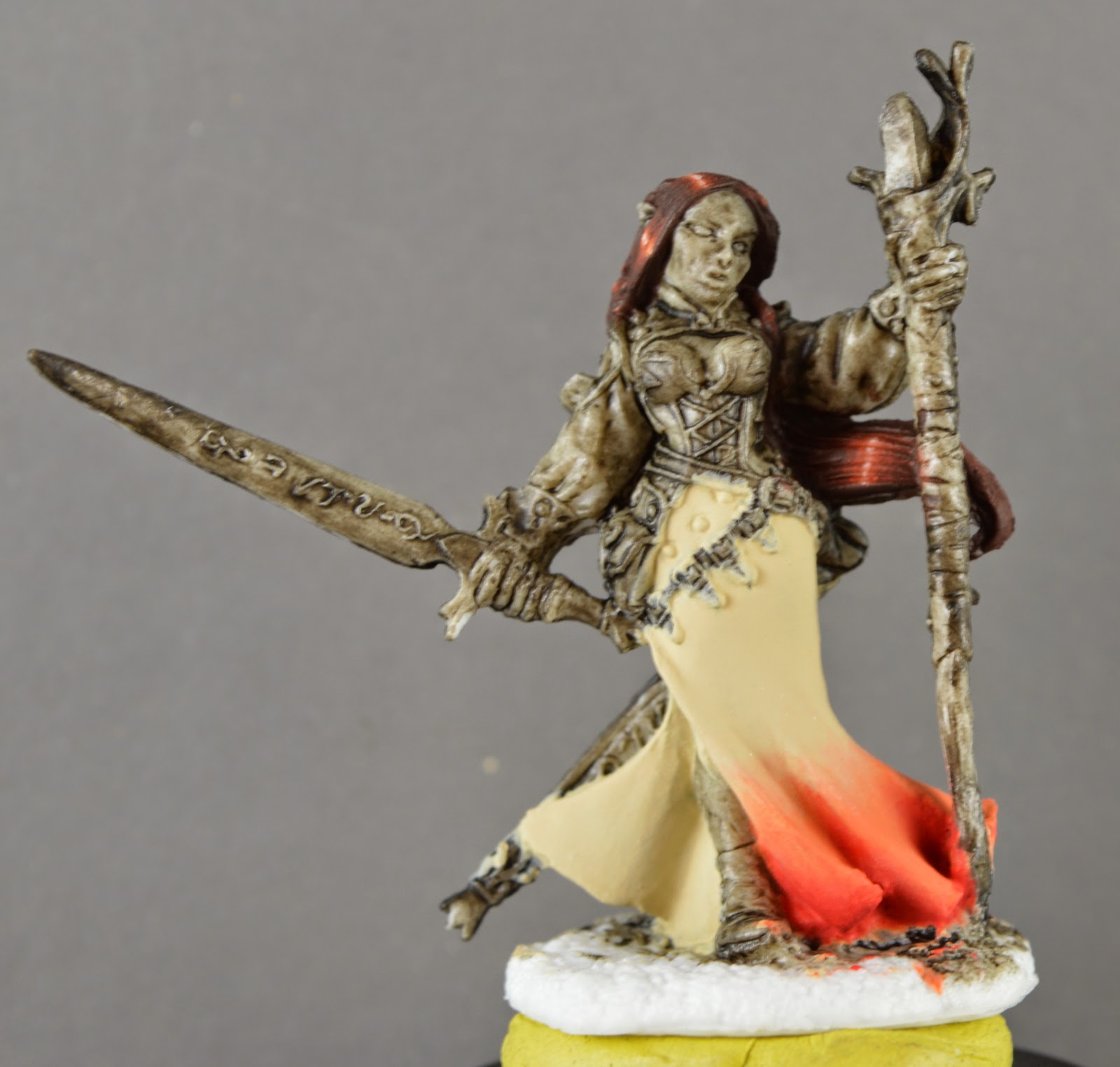 There we go. Now on to the highlights. I mixed a bit of the German Orange into RMS Lemon Yellow (9009) for the first highlight. 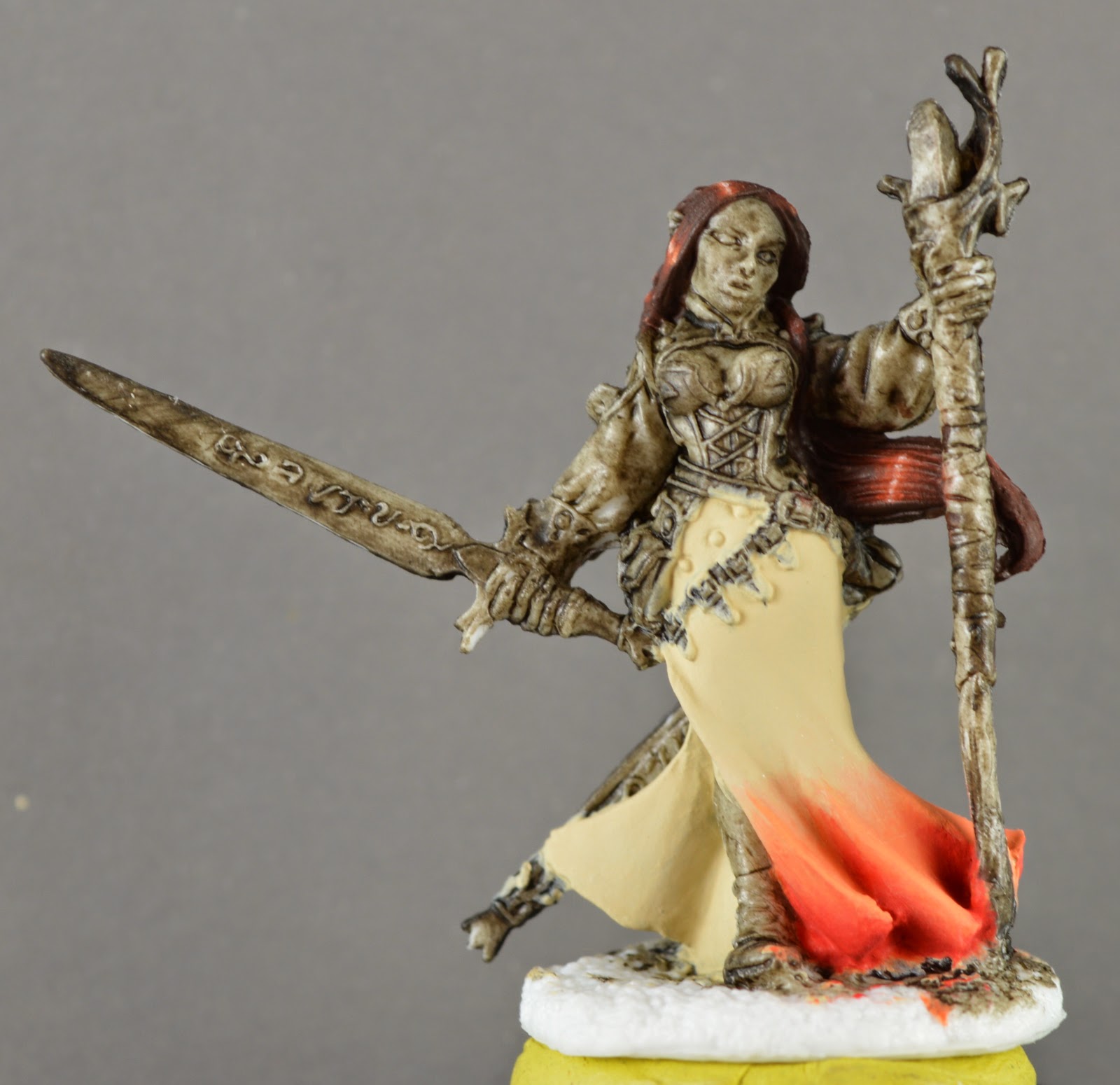 Then for the brightest highlights I used pure Lemon Yellow. 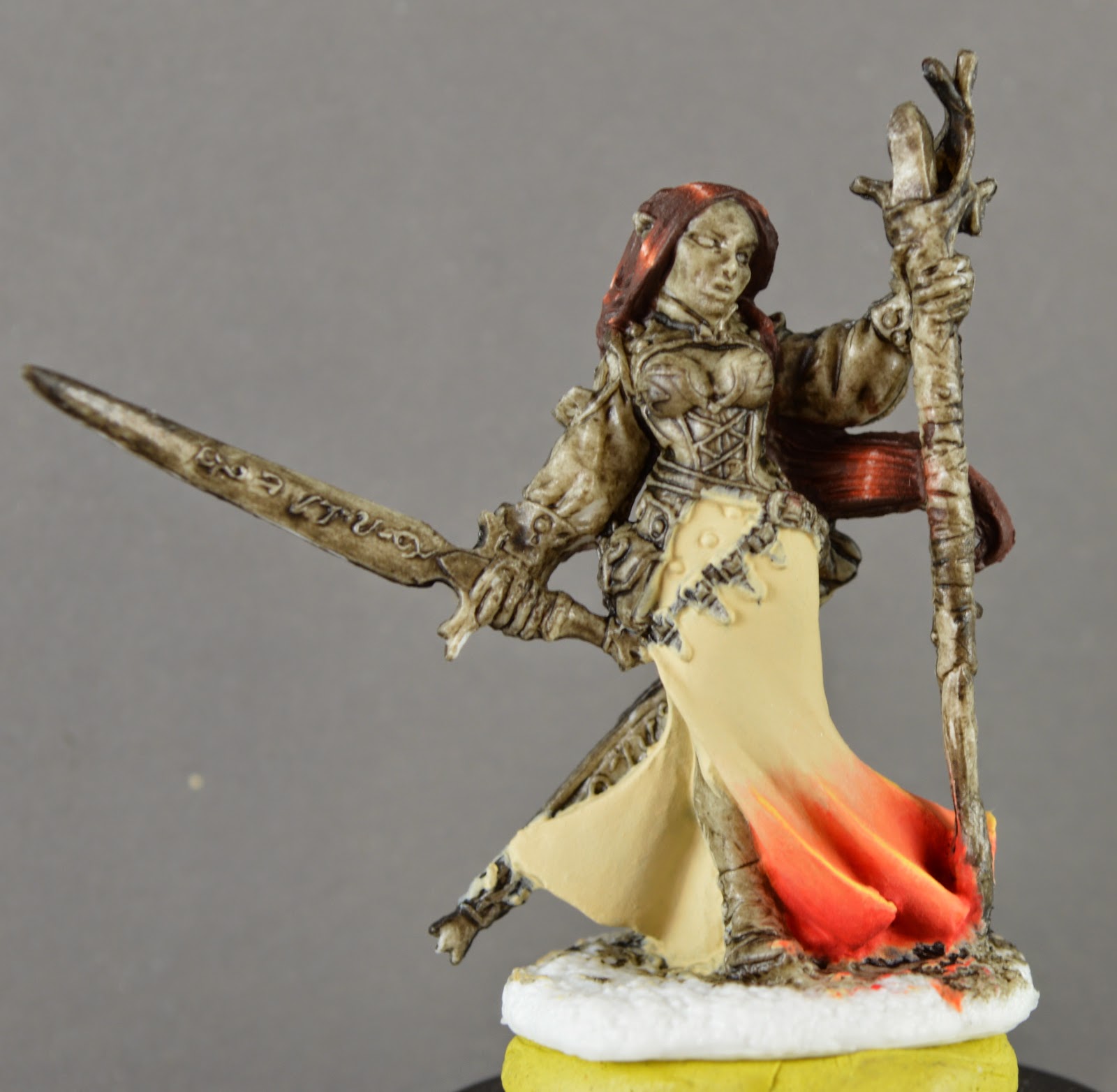 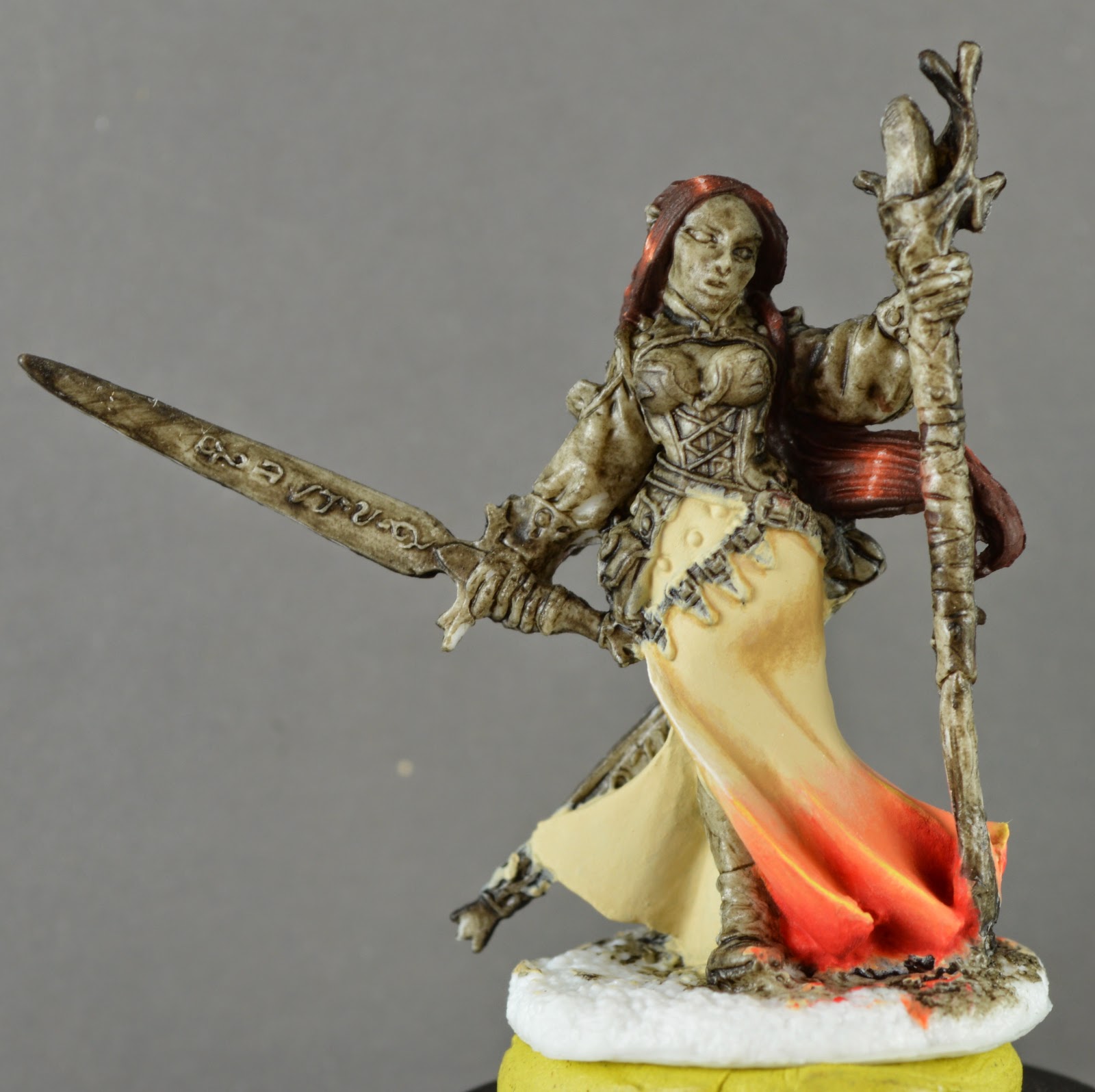 Last, I highlighted the beige part of the skirt with RMS Linen White (9061). 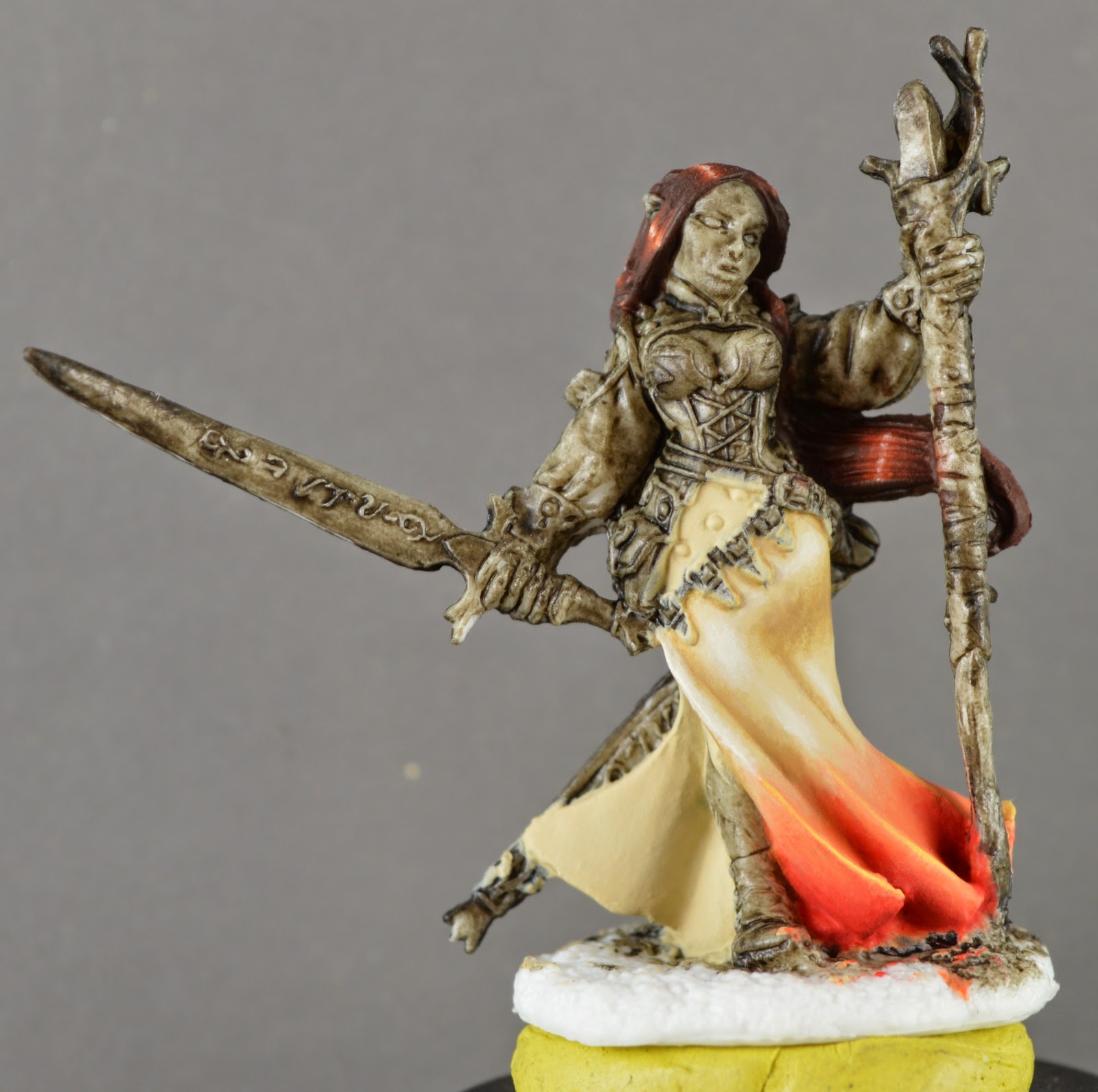 And that's it. It's not that different from painting any other kind of cloth, except you have to shade and highlight separately for each base color. The only other trick is to keep your transition between the colors smooth.
Posted by MiniPainterJen at 6:33 PM

Email ThisBlogThis!Share to TwitterShare to FacebookShare to Pinterest
Labels: Tutorial